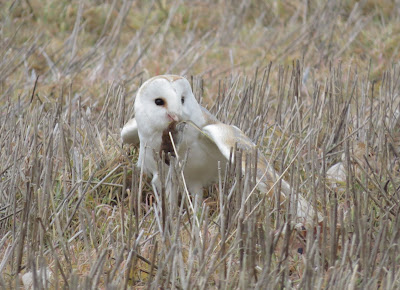 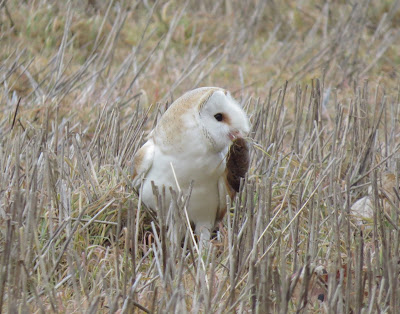 I am still busy operating my feeding station but can't do any ringing there yet because of the avian influenza outbreak, but I am hopeful that the suspension will be lifted as soon as this week; fingers crossed!
Posted by The Hairy Birder at 21:31 No comments:

High tide was in the early hours yesterday morning so I decided to have a look at the river at first light. As I set off along the edge of the saltmarsh I had 7 oktas cloud cover with a 10 mph southerly wind. A number of 'Pink-feet' were leaving their riparian roost, 174, and I also had 280 go over high north; some early vis.

As I walked, or should I say slid, along the muddy path a flock of 19 Twite flew over my head calling away, and I soon reached my watch point over the river. There were large Gulls coming and going to bathe and their numbers were quite spectacular, in fact my counts didn't represent the true numbers. I counted 990 Herring Gulls, 17 Great Black-backed Gulls, 32 Lesser Black-backed Gulls (starting to move through now and looking immaculate in breeding plumage) and 115 Black-headed Gulls. In reality there is probably 3,000 large Gulls at the site at the moment.

After some time going through the Gulls I picked out the 2CY Glaucous Gull that has been around for a number of weeks. I'm not a huge Gull fan, but even I can appreciate this giant white winger! There wasn't much wildfowl on this stretch of the river, but a flock of 110 Lapwings was nice. Walking back across the saltmarsh I added Rock Pipit and a male Reed Bunting.

I had a look on the pools next and there was two Shovelers (male & female), seven Tufted Ducks, six Mallards, 38 Coots and a Great Crested Grebe. I had a wander in to the reeds to check out some of our net rides in preparation for the lifting of the suspension of ringing within the 10 km surveillance zone for the relatively local avian influenza outbreak. All looked well and in fact I got to some net rides that we haven't managed to get to for two years due to high water levels, so that shows what a dry winter it's been.

All I had in the reeds was another Reed Bunting plus a Snipe and a singing Cetti's Warbler. So all in all a pleasant couple of hours!
Posted by The Hairy Birder at 20:36 No comments:

I was up above the Wenning earlier this week measuring various habitat features.It wasn't a bad morning with 3 oktas cloud cover and a warm southerly breeze.

I walked from the huge old barn which has been sympathetically restored to be still used for agriculture. This is great as a lot of these old barns don't fit in with modern farming practises and are either converted to housing or left to fall down. The barn has also been restored with the colony of House Sparrows that occupy it in mind and lots of holes, nooks and crannies have been left in the external skin of the building for the Spadgers! The twenty or so knocking around the barn seemed happy!

I headed up to the Iron Age hill fort and with such warm weather lots of Buzzards were on the wing and in total on my walk I counted seven. Song Thrushes were singing and I had a Great Spotted Woodpecker drumming in the woodland. A singing Skylark and three Brown Hares added to the mix. 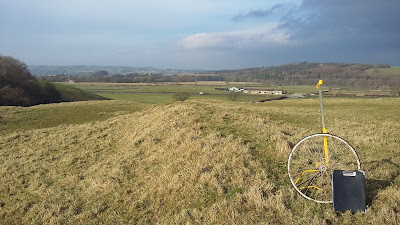 In one field I had a feeding flock of 24 Redwings and 57 Fieldfares which was nice. Along the track at different positions I had two Stoats pop out of the hedge to investigate what the noise was coming from my measuring wheel, but sadly they vanished before I could get a photograph. Three Siskins overhead and a Little Egret down by the river and that was me finished for the day. Not bad for some non-birding work!
Posted by The Hairy Birder at 21:10 No comments:

Herdies But Not In The Hills

Valentine's Day found me continuing with my wintering bird survey in deepest, darkest Merseyside. It was dark when I set out and pretty cold in the 10 mph southeasterly wind. Close to where I am surveying is an area of dunes that are grazed in the winter with some Herdwick sheep, which I think are amongst the bonniest of our native sheep breeds. 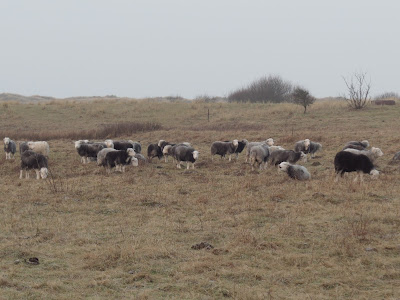 All my birding seems to be birding for work at the moment, but I mustn't complain as at least I am getting out! Hopefully I'll be on the patch this coming weekend. I do apologise for saying that as the weather will be awful this weekend now!
Posted by The Hairy Birder at 19:33 No comments:

Over on the right you will see that I have updated the ringing totals for Fylde Ringing Group up until the end of January. The only thing worth noting is the sterling work Phil and Andy are doing on Linnets with 59 ringed during the month. With a number of our ringing sites falling within a 10 km avian influenza surveillance zone, the totals for February will be even more meagre; roll on spring!

I called at my feeding station yesterday and all I had of note was a single Grey Wagtail. I've sacrificed birding this morning for some post beer festival recovery and to get my bird records for 2016 in order for the county recorder!
Posted by The Hairy Birder at 10:46 No comments: 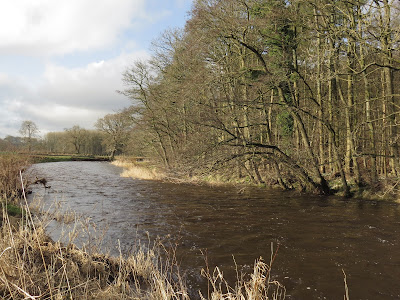 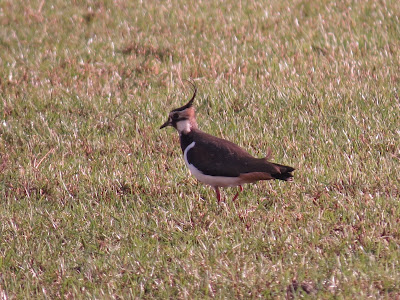 I finished the day off with a pint of Stanley's in the new Kirkby Lonsdale brewery in the Royal Barn in Kirkby, and very nice it was too!
Posted by The Hairy Birder at 21:51 No comments:

Over the past week or so on my travels one thing has been obvious and that has been bird song! A number of species are starting to sing including Dunnock, Mistle Thrush, Song Thrush, Great Tit etc, etc, etc! It's great to hear, and makes you look forward to spring! But, there's still a good bit of winter to get through first and Feb can be a tough month.

It's been fairly quiet at my feeding station and the food I am putting out is lasting 5-6 days, which is unusual at this time of year. There hasn't been anything notable but counts of some species included 21 Magpies, two Buzzards and 15 Goldfinches.

There has been some Pink-footed Geese within the Obs recording area and peak counts have been 800, but sadly I haven't had anything else amongst them despite giving them a good grilling! 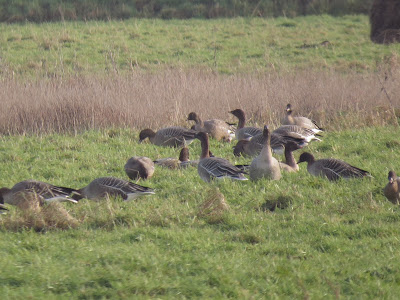 At one section of the survey area I caught a flash of reddish-orange and saw a Red Squirrel running ahead of me. It climbed up into a Scots Pine tree and was at one stage upside down clinging to the underneath of a major bough! Sadly the sun was behind the tree and my pictures aren't good to say the least, but you can tell it's a Red Squirrel!

Red squirrel (above & below) 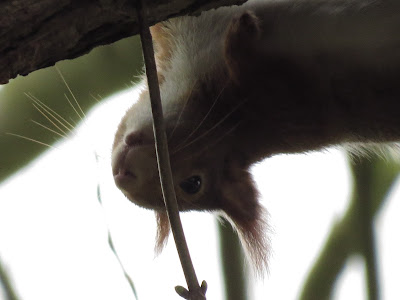 At weekend I had a look at the southern part of the Obs recording area around the farm fields, and this was my first look at this bit of the Obs since Christmas. On my walk round I had a Long-tailed Tit, a singing Song Thrush, 14 Woodpigeons, a pair of displaying Kestrels close to their nest site, a male Sparrowhawk, 34 Herring Gulls and a Mistle Thrush.