It's been seven days since I did any birding, which is probably the longest period of non-birding for me ever! I haven't even done any work related birding this past week either. I have been busy with boring paperwork associated with my business and that combined with some horrible northwesterly winds has meant that I haven't got out. But I am back in the saddle now.

This morning I headed to the coast to have a look on the sea and count any vis or grounded migrants that I might encounter. The wind was NE 10-15 mph with six oktas cloud cover. It was fairly clear looking across the bay but there was a definite heat haze. 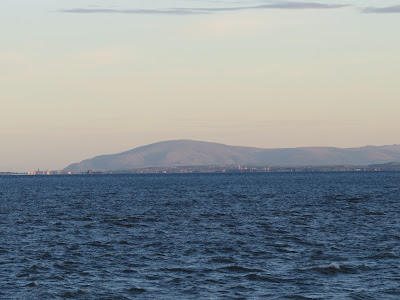 Views across the Bay to the Lakeland Fells (above & below) 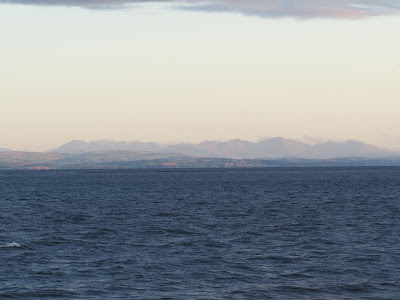 There were a number of waders on the beach that were roosting on the highest shingle ridges at first, but then they moved to sandier areas to feed as the tide ran out. In total I had 58 Oystercatchers, 200 Sanderlings, 62 Ringed Plovers, 85 Turnstones, 55 Dunlins and a Knot. 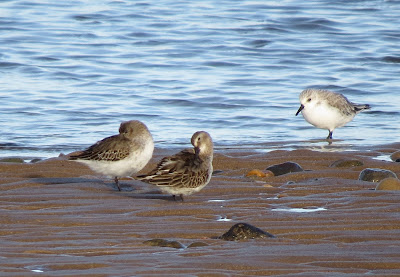 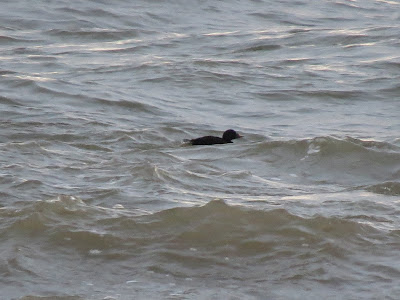 Perhaps the most interesting feature of the morning was the vis. It started off slow and increased as it warmed up. Most of the Swallows were moving east in to wind, but the Meadow Pipits and Wagtails were coming 'in-off' and heading south. In the following totals I have included the birds that I had over the cemetery a little later on as well; eleven Alba Wags, 98 Meadow Pipits, 77 Swallows, four Grey Wagtails, a Rock Pipit and two Skylarks south.

Grounded migrants were limited to a Goldcrest, two Wheatears and a Sedge Warbler. The only raptors I had this morning were a single Kestrel and immature male Sparrowhawk.

After I left the coast I popped in to the cemetery to see if there were any grounded migrants there and I had five Robins, three Dunnocks and two Goldcrests that I considered to be 'grounded'.

As I type there is a rapid low pressure system approaching us that is likely to give strong SSW winds tomorrow morning, veering to WNW overnight into Monday and still blowy but decreasing on Tuesday. There's a good chance it will bring some seabirds in, including Leach's Petrel perhaps, and at the moment Monday looks the best day as the winds will have been blowing for a sustained period by then. I'll let you know what blows in, if anything!
Posted by The Hairy Birder at 19:10