On Wednesday morning I completed one of my wintering bird surveys in Merseyside. I had virtual clear skies with a 10 - 15 mph south-southwesterly wind.

For the second survey running I bumped in to one of the local birders and it's amazing what a small world it is! We got talking about what we had seen etc, etc and I was asking him about Barn Owls in the area and this lead on to the subject of Southwest Lancs Ringing Group and their work on Barn Owls, and I know many of this group quite well so was able to pass my regards on to some of them via him! He told me about a good friend of his who was coming over to see him this weekend who has just published a book about Spurn, and of course this book is on my Christmas list; what a small world it is! 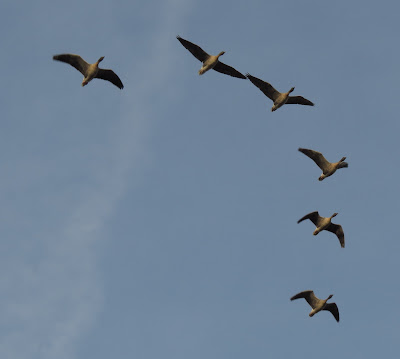 When I first arrived before sunrise as I approached a wooded area a number of Magpies were exiting a roost and I counted 56. I think there were far more than this as when I arrived I got the impression that the 'exit' was underway!

High tide was at 1100 and leading up to 1100 way over to the west I could see large swirls of 'smoke like' concentrations of waders, which were obviously Knots, and I estimated that there were at least 10,000, although in all honesty this was more of a guesstimate!

We've got high pressure slipping in over weekend so I am hoping to get out birding somewhere and also to do some ringing at my feeding station. There's a Facebook page that I follow called 'Highland & Islands Weather' and yesterday they posted to say that "an intense jet stream looks likely to develop later next week in the North Atlantic, deep areas of low pressure will also develop, although the exact path of these is still uncertain just now but some computer models bring a storm very close to Scotland on Christmas Eve". Looking at the weather charts that they have produced it looks like we could get some strong southwesterly winds here in northwest England, and with morning tides on Christmas Day it could easily mean some seawatching for me Christmas morning!
Posted by The Hairy Birder at 15:19