Every year I harvest Willow stems from the Willows in my garden,drop them in a bucket of water for a week or three and then plant them out at the Obs to bulk out some of the net rides, and yesterday was my planting day. I hadn't realised just how many there were in my bundle, but let's say I was planting Willows for some time!

After I had finished planting as it was quite warm and sunny I decided to have a wander around the farm fields to see if there were any migrants about. First up were a pair of Stonechats working their way along the fence posts and also perching up in the dry Phragmites reedbed.

I didn't have any more migrants until I was back along the main hedge and here I managed to 'pish' two Chiffchaffs and a Blackcap. I couldn't see the Blackcap, but just hear it's hard Sylvia 'tack'.

A number of Woodpigeons were flying out of this hedge and I noticed that one of the birds had left a nest. A quick scan and I could see two eggs, which is an average clutch size for a Woodpigeon. Talking of nests and eggs, I noticed that a female Blackbird is sat on a nest in the hedge in my garden, so I'll have to keep an eye on her and hope that none of the local cats get any of the young. 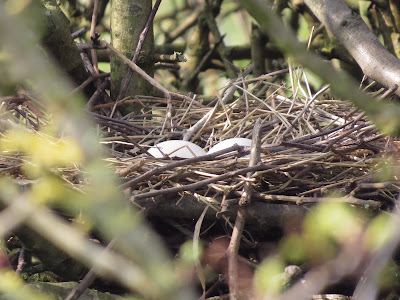 Before heading home I bobbed in to the cemetery and added three Goldcrests and two Chiffchaffs to my morning migrant tally!
Posted by The Hairy Birder at 15:52

Well done you with the willows ,if only more people did planting like that , good luck ,
Gordon.