Over the past couple of days I have been fortunate enough to have been carrying out bird surveys in north Cumbria, and also birding the Solway on the Scottish side of the border. Long time readers of this blog will know the passion I have for Scotland, and I still hope that in the not too distant future it will become our home, so any opportunities to bird north of the border are gratefully received.

Yesterday it was the first of my plantation woodland breeding bird surveys and it is the last year of this five year project. Even though at times the surveys haven't been exactly hooching with birds, I will nevertheless miss not doing them next year!

It was a cold clear morning as I set off at my survey site not too far from Carlisle, with a light southerly wind. As always at this site the first birds I hear whilst walking to the first compartment are singing Yellowhammer, Chiffchaff and Great Spotted Woodpecker. In fact I had two singing Chiffchaffs on this morning and a third feeding bird. Just one singing Willow Warbler in the first compartment, and four Stock Doves came out of an old ruined barn. 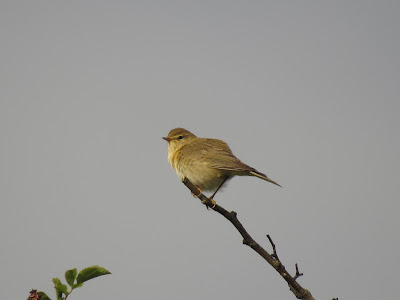 In the cold conditions the second compartment was thin on the ground with noteworthy birds, other than a singing Song Thrush and a Tree Sparrow. The third compartment was quiet too, but at least there was a singing Blackcap to listen to. It felt as though Spring hadn't quite sprung up here, but that might be me looking for reasons for a lack of birds.

I then headed north of the border to bird the Solway between Gretna and Eastriggs. This site has become a bit of a 'patch' in recent years, and I always look forward to a few annual visits. One of the beauties of the site is that there is nobody there and the waders on the shore tend not to get disturbed. 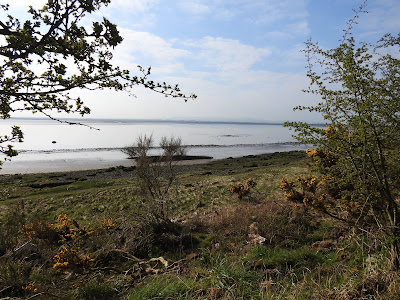 Out on the river a group of Goldeneyes drifted past on the falling tide and the flock was made up of two males, five females and six immature birds. Other wildfowl included fifteen Wigeon, a male Goosander, two Teal and six Shelducks.

There was a few waders on the shore and the numbers of passage waders had started to build up with 207 Ringed Plovers and 65 Dunlins. Other waders included eleven Curlews, 53 Redshanks and three Oystercatchers. A single Little Egret was roosting with head tucked in and I turned my attention to terra firma.

Along the edge of the estuary here above the high water mark is a line of scrubby habitat consisting mainly of Hawthorn, Blackthorn, Gorse, Broom, Alder and Birch sp. This habitat does hold a few migrants and this morning it was just three Chiffchaffs, three Willow Warblers and two Siskins. 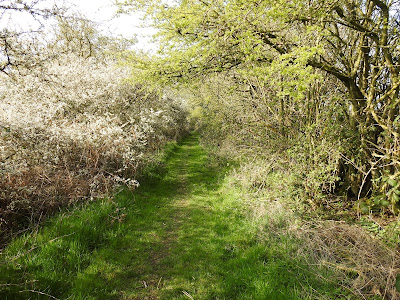 The habitat along the edge of the estuary (above & below) 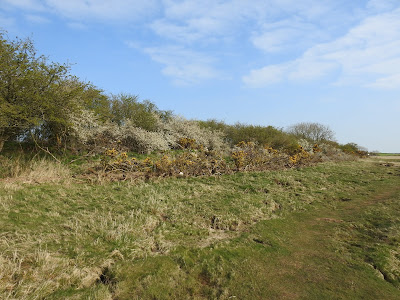 Friday morning saw Gail and I at our northwest Cumbria wintering bird survey site, now doing the first of a couple of breeding bird surveys, and it was quiet. Well, quiet on the breeding bird front, but there was a bit of vis including Siskin, 24 Meadow Pipits, four Lesser Redpolls, 19 Linnets, Swallow and four Goldfinches.

The resident pair of Grey Partridges were still present and grounded migrants were limited to a male Wheatear and a Willow Warbler. Raven and male Peregrine both made it into my notebook and that was it.

I've got bird surveys everyday except Thursday next week, and I am hoping to get out at the Obs tomorrow, and as usual I'll keep you posted.
Posted by The Hairy Birder at 15:38