Last Saturday Gail and I made our third visit to our boxes in the Hodder Valley. We managed to ring two broods of Great Tits (18 chicks in total) and a single brood of Blue Tits, containing eight little 'n's! We also lifted another female Pied Flycatcher off the nest, leaving just two females from the nine pairs to lift; more on this later.

That evening I ran my moth trap for the first time in a while and managed to trap a new species for the garden in the form of an Iron Prominent. When I photograph the moths that I have caught in my moth trap on release, I like to place them on vegetation rather than take them against the background of the egg carton, as I think it makes a better photograph. So I placed the Iron Prominent on some vegetation and it dropped off the leaf I placed it on, out of sight, so I didn't get a photograph! Note to self..."photograph any new species for the garden on the egg carton to get a record shot, before placing said moth on vegetation to get a more natural shot"!

I trapped five moths of four species as follows; two Garden Carpets, a Heart and Dart, a Flame Shoulder and the aforementioned Iron Prominent.

On Monday Gail and I were in North Lanarkshire for our third breeding bird survey visit, and again it was warblers that dominated proceedings. We recorded seventeen Sedge Warblers, 21 Whitethroats, 32 Willow Warblers, three Blackcaps, seven Grasshopper Warblers, a Garden Warbler and two Goldcrests.

On Thursday I undertook one of my on-going hedgerow surveys for one of my client's in the Lune Valley in north Lancashire. First up as I was putting my wellies on in front of the barn was a late Whimbrel that flew low, but heading north, calling. On the barn there were at least three active House Martin nests and below is one of the adults in the process of nest construction. 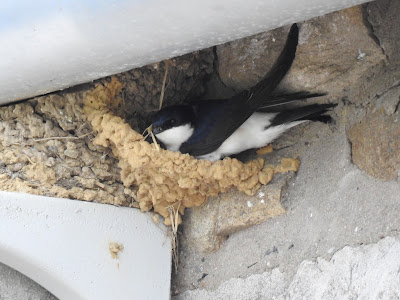 The survey itself didn't produce anything notable other than a singing Lesser Whitethroat (is it me or are they a bit thin on the ground this year?), several pairs of Lapwings, Curlews and Oystercatchers (yes I know they aren't hedgerow birds), two Great Spotted Woodpeckers, a juvenile Song Thrush, two Blackcaps, a Garden Warbler and female Goosander and Common Sandpiper on the river during a coffee break. 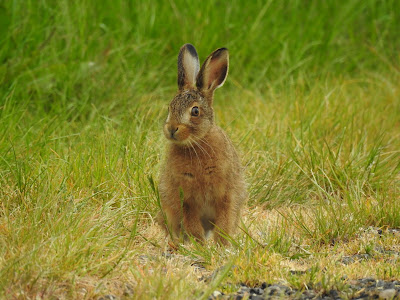 Gail and I were at one of my plantation woodland survey sites in north Cumbria, near Wigton on Friday and it was quiet. We did record a few bits and pieces of relevance to the on-going project, but nothing too noteworthy to mention here. The survey was short and sweet so we headed north of the border to bird the Solway from the Scottish side near Annan. Oh, and to nip in to Tescos in Annan to procure some Orkney Brewery beers! I forgot to mention that on our way back from North Lanarkshire we stopped off in Moffat (well worth a visit if you haven't been) for lunch and purchased some beers from one of my favourite breweries, Sulwath. Anyway, I digress!

The scrub along the shore held six singing Willow warblers, six singing Whitethroats, two singing Sedge Warblers and we had two singing Grasshopper Warblers form some predominantly grassland habitat inland. It was quiet on the estuary other than 97 Shelducks, two male Goosanders and a surprising male Shoveler that dropped in. The only waders we had was a flock of twenty Dunlin and a handful of Curlews and Oystercatchers.

A number of butterflies were on the wing including Orange Tips, Walls, Small and Green-veined Whites. It was then time to purchase my beer!

This morning we made our fourth visit to our Pied Flycatcher nest box scheme in the Hodder Valley and had a great deal of success. We lifted the last two remaining females from the nest that we required, so we have now recorded all the females from the nine pairs of Pied Flycatchers occupying our boxes. We also used some traps in the boxes that had chicks in for the first time, in attempt to catch some of the males as part of a larger Retrapping Adults for Survival (RAS) project in Bowland, and managed to catch two of these spanking black and white birds! 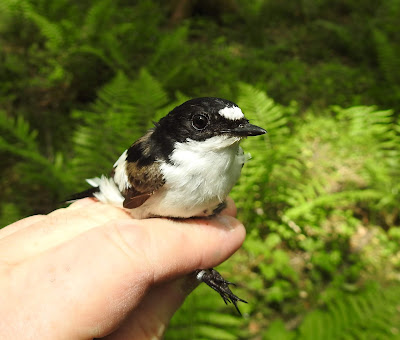 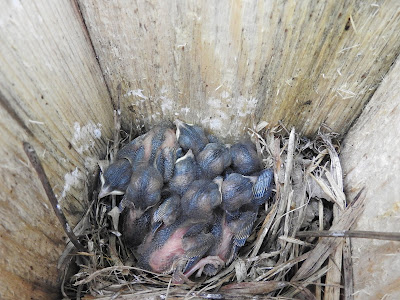 As always I am indebted to Gail for all of her help and company out in the field, and as such I had better sign off and pour her a large whisky! I might just have one or two of those Orkney beers too!
Posted by The Hairy Birder at 20:10