The Weary Week That Was

It's been a quiet time for me this past week, in fact it's been quite a weary week weather wise; cold, wet and windy.

However, last Friday dawned bright and clear and I headed to Great Eccleston to have a look at Simon's farm, and give him some advice if needed. Simon owns the site where I have my nest boxes in the Hodder Valley, and in fact we are going to set up a feeding station there, but more of that later.

The farm near Great Eccleston is all grass and it is a livestock farm. It is wet, and contains several floods that look good for wintering wildfowl and hopefully breeding waders. There is little in the way of hedgerows on the farm, but a number will be planted over the winter.

I met Simon in the yard and we headed out on a circular walk around the farm. First up was a Buzzard flying over, and then eight 'whooping' Whooper Swans flew in from the north. The floods were quiet with just a couple of Grey Herons on them.

As we walked along one of the flood embankments 60 - 80 noisy Fieldfares dropped into the trees, before taking to the air again and scattering because of a female Sparrowhawk drifting over.

It was certainly a morning of flyovers because we had three Green Sandpipers go over, two Little Egrets and 160 Pink-footed Geese.

Did he need any advice? No it all looks great, and I look forward to calling in on a semi-regular basis and record what's there.

There was a half chance that it could be fit for ringing on Sunday just gone, so I headed to the reedbed and scrub where we ring at the Obs to check the water levels in our net rides. As I mentioned before it has been very wet of late, and rather than turning up in the dark with all my gear, I just wanted to make sure that it was okay first.

I managed to walk in through the reeds to the net rides, but it was wet, probably half way up my wellies. The net rides were similarly wet at the southern end of them, but dry at the northern end. It was workable, but on balance with the time of year, the likelihood of being able to pull birds down at the very end of the autumn migration, and the fact that the odd bow wave would undoubtedly top over my wellies, I decided to officially close the site until Spring, and took all my ropes off.

I had a look on the pools and there was thirteen Tufted Ducks, 33 Coots, two Shovelers and 68 Herring Gulls.

Before heading home I decided to have a look at the mouth of the Wyre estuary and have a walk down to the Quay. The walk down to the quay was quiet with just 400 Pink-footed Geese heading northeast. In the Quay as the tide was dropping a few waders were stopping off to feed on the newly exposed mud, including two Curlews, 69 Redshanks, ten Oystercatchers, 46 Black-tailed Godwits and four Dunlins. 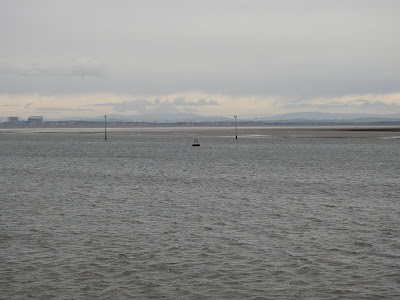 The mouth of the Wyre estuary 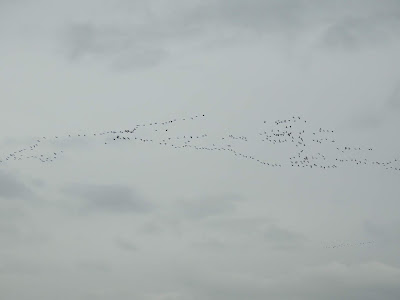 Yesterday I treated Gail (I did buy her lunch) to an hours work out in the Hodder Valley clearing an area to set up a winter feeding station for ringing. The site holds good numbers of Lesser Redpolls and Siskins, and it is these that we seek to target. So after an hour of sawing, lopping and clearing, we had an area cleared surrounding the proposed feeding station where we could put up three different nets to suit different wind directions. The photo below shows the feeding station with a lonely feeder on it, but by the end of the week there will be another five! We just need the weather now! 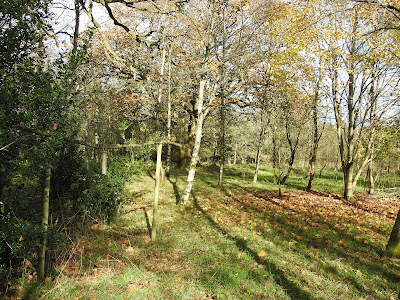 Feeding station
Posted by The Hairy Birder at 21:22