For the past two days I have been out at first light doing the rounds irrespective of the weather, because it is October after all! I joined a meeting of the Highland branch of the Scottish Ornithologists Club (SOC) yesterday evening, via Zoom, to hear a talk by John Callandine on Short-eared Owls, and it was brilliant by the way, I learned so much. However, the main reason I mention this is because before John gave his presentation, some members were saying what they were seeing in their gardens. The locations of these gardens were spread across Orkney, Caithness, Sutherland etc, and most people were reporting lots of Yellow-browed Warblers in their gardens. One person would say they had three in their garden yesterday, and another person would say they had six! We do get Yellow-browed Warblers, and numbers are increasing, and there has probably been at least three seen in the past few days within the Obs recording area, but they have been hard won, and it takes a lot of effort continually doing the rounds day after day. Some lucky people due to their geographic location in Britain, can just open their curtains in the morning, and see one of these eastern sprites!
It was cold yesterday morning, with virtual full cloud cover, and a 20 mph north-westerly wind. I'm not sure why I bothered going out really, hang on I remember, because it's October, the migration month! As usual I started off in the cemetery, and the trees were whipping from side to side, making it pretty difficult to detect any birds, if any birds were indeed around!
I heard some Carrion Crows alarm calling and I could see that they were mobbing and chasing a female Sparrowhawk, in fact it went on for several minutes. They were chasing her over and through the headstones, round the trees, but they were no match for her flying skills. Occasionally she would have enough, turn, and chase one of the Crows. Eventually it all calmed down, and peace ensued.
Walking along the northern edge of the cemetery, I saw a small bird fly from some of the Japanese rose that has established along here (the Greenfinches love the hips on it at this time of year), and I thought that looked interesting, a bit chat-like. It perched up out in the open, and I lifted my bins, and it was a male Stonechat. Actually, I was quite pleased with that, as they are a good bird for the cemetery.
There was nothing else grounded other than four Goldcrests, so I moved on to the coastal park. It was even quieter in here, with just a single Goldcrest to add. In fact, there was a lot of disturbance due to building work, as the local authority secured some Lottery money to restore elements of the park.
I wasn't exactly enthused by the morning's sightings, so I cut my losses and headed home for a coffee!
The second day of doing the rounds, saw me start off again at first light at the cemetery under four oktas cloud cover, with a 15 mph north-easterly wind. A north-easterly is a tricky direction in the cemetery, as most of the cover is along the south, west and north sides leaving it exposed from the east. In fact, I really struggled to find any grounded migrants, other than three Robins and three Coal Tits. 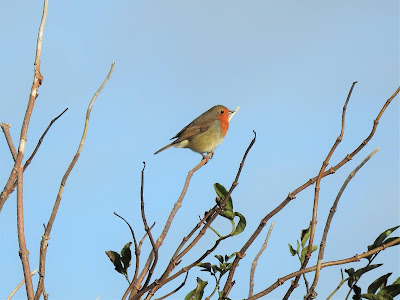 Robin
A Sparrowhawk was present again, but this time it was a young male, and it didn't have a Corvid escort. I moved on to the coastal park, knowing it was sheltered in places when the wind is coming from a northerly direction, but all I could add was a single Goldcrest. I came across the Red Admiral below, with its 'solar panels' open, catching some rays in a sheltered spot. In fact, in the bright morning sun, it looked more orangey-red, rather than reddish-orange! 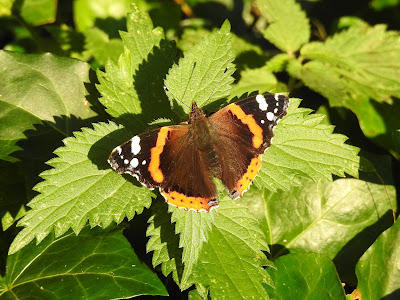 Red Admiral
The farm fields beckoned, so I headed there for a walk around the fields and hedges. I started off by walking along the sea wall and I had a cursory look on the sea, and had a male Eider, and a Razorbill still virtually in summer plumage, relatively close in. It was nice to see a Razorbill on the patch so close in, as they are often just whizzing north or south in spring and autumn. 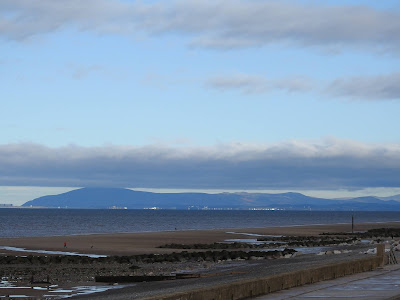 The view from the farm fields looking across the Bay to the Furness peninsula
I had my first Whooper Swans of the autumn from this spot as well, with five birds heading south along way out to sea. Talking of wildfowl, I also had a flock of 200 Pink-footed Geese head south, contrasting nicely against the azure sky. 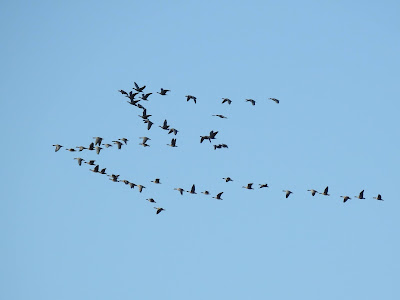 Pink-footed Geese
There was next to no vis, and a species that you normally associate with vis in autumn, the Meadow Pipit was a grounded migrant this morning, and at least 50 were in the wet fields. The four Robins I had, could have been grounded, but the Wheatear on the sea wall definitely was.
It's a bit of an iffy forecast again for tomorrow, but unless it is absolutely awful, I'll get out, because it is October after all! Who keeps saying that?
Over on the right you will see that I have updated the ringing totals for Fylde Ringing Group up until the end of September. Only one new species new for the year was ringed during September, and that was Grey Wagtail.
Below, as usual, you will find the top five ringed for the month, and the top ten 'movers and shakers' for the year.
Top 5 Ringed in September
1. Meadow Pipit - 101
2. Greenfinch - 35
3. Blue Tit - 20
4. Chiffchaff - 15
5. Goldcrest - 14
Top 10 Movers and Shakers for the Year
1. Linnet - 128 (same position)
2. Meadow Pipit - 116 (straight in)
3. Willow Warbler - 92 (down from 2nd)
4. Blue Tit - 80 (up from 5th)
5. Pied Flycatcher - 73 (down from 3rd)
6. Great Tit - 66 (same position)
7. Sand Martin - 63 (down from 4th)
8. Blackcap - 56 (down from 7th)
9. Greenfinch - 54 (straight in)
10. Goldfinch - 51 (down from 8th)
Posted by The Hairy Birder at 20:44

YBWS? Definitely garden birds on the east coast now Seamus. My best count is 2- 3 last week... I can hear them calling so loudly from my work desk in the spare room, youd think it was in here with me!

YBW would be a good tick for my garden Stewart!