A few Blog posts ago I mentioned the possibility of getting back into the Willow scrub at the pools to do some ringing, and at weekend Alice and I did just that, but it was wet! Very wet in fact. We would normally put up 160 feet of net, but we could only get 60 feet up because of the wet conditions. It wasn't terribly deep in the very wet bits, perhaps about 2 feet, and it was dry as I expected at the northern ends of the net rides. However, the dry bits only extended to about ten feet, so the end of both 30-foot nets we put up were over water. We will attempt another ringing session there this coming weekend, and I expect that the water levels will have dropped a little more.
The day dawned with 7 oktas cloud cover, with a light easterly breeze. Singing warbler wise we had two Grasshopper Warblers, a Blackcap, a Reed Warbler, a Whitethroat, three Cetti's Warblers and a Sedge Warbler. There was very little vis, that seems to be a common theme this Spring, with just a couple of Swallows and a Sand Martin north, and a couple of Siskins northeast.
A Common Sandpiper flew round the scrape calling, looking for somewhere to land, but couldn't, and headed off east. A pair of Sparrowhawks made it on to the pages of my notebook, but little else did.
All we ringed was a female Blackcap and Blackbird, and we recaptured a male and female Cetti's Warbler. Both Cetti's Warblers were ringed in 2020. Let's hope that we do better this coming weekend! 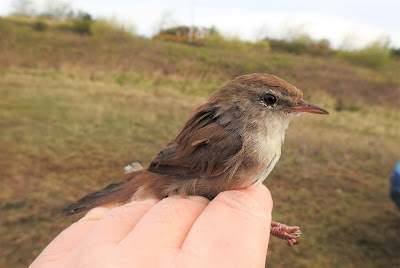 Cetti's Warbler
One of my favourite wintering wildfowl species is Scaup, and over the years I have noticed that I see less and less. I never came across lots of them, but anecdotally my records over each subsequent winter seemed to paint a declining picture. With that in mind, I was interested to read a snippet in British Birds and on Birdguides that stated that an analysis of coordinated count data from the last 30 years has shown a 38.1% decrease in wintering numbers of Scaup in northwest Europe, from 309,000 individuals during 1988-91 to c.192,300 during 2015-18. The short article went on to say that annual trends in wintering numbers differed throughout the range, with numbers decreasing in the UK, Ireland and Netherlands, stable in Denmark, and increasing in Germany, Poland, Sweden and Estonia. This suggests a shift in the distribution of the species within its wintering grounds towards the east and north.
One theory put forward for this decline and shift in distribution, is increasing winter temperatures in the north and east of the Scaup's wintering range, with climate change seemingly opening up more wintering sites to the species, as winter ice cover extent decreases. There are other potential factors cited as well, including a deterioration in food quality in the south and west. All very worrying.
As a little aside, the scientific name for Scaup is Aythya marila and the Scaup was the favourite bird of Peter, who is sadly no longer with us, but he was a long standing member of our ringing group, and a dear friend. When his daughter was born, Peter and his wife decided to call her Marila! What a beautiful name.
Posted by The Hairy Birder at 12:32