Since my last ringing session on 3rd August, the weather hasn't been fit for any further sessions in the reedbed and scrub at the Obs, and this has been a tad frustrating. I've also had a bit of work to do this week as well. I'm not going to complain, but I went from no work this week, to working on three days! Like I said, I'm not going to complain, as most of my work is really interesting, so I am very fortunate that way.
On Tuesday (10th), I was doing some more work on my client's exciting Curlew project on his farm in Bowland. We are putting the steps in place to hopefully have a very positive impact on the breeding population on the farm. There are at least ten pairs of Curlew that nest on the farm already, but the measures that we have put in place should hopefully increase the number of breeding pairs, as well as making sure that the nesting attempts lead to positive outcomes, as best as we can anyway.
We are employing a mix of habitat creation, and changing some of the farming practices. The changes in farming practices that will benefit the Curlew breeding population on the farm include:
- no livestock grazing during April and May.
- light cattle grazing in June and July.
- no machinery operations from March - July e.g., no chain harrowing or rolling.
- predator control (mainly Corvids) in the wader priority areas between February and July.
- no slurry or fertiliser applications.
- all meadows to be cut no sooner than the end of July.
One of the big issues for Curlew productivity is the date that meadows are mown for silage production. We will be cutting late, and doing all the meadow management in-house, so there should be no losses of Curlew chicks to machinery.
Some of the habitat creation/management options that we will be putting in place include:
- felling an area of conifer plantation to open up breeding areas for Curlew. The felling of the
plantation will remove the existing displacement effect of the trees.
- creating additional scrapes & small open ponds.
- blocking drains.
- restoration of traditional hay meadows.
Alongside all of this, the grazing regime on the farm will be there to manage the habitat to support the breeding wader population, that in addition to Curlew, includes Lapwing, Snipe, Redshank, Oystercatcher and Common Sandpiper. All very exciting stuff!
The plan was to head down to the river this morning and have a look and see what waders were on offer, but there wasn't any room where I normally park my car, so I headed to the coastal farm fields at the school instead.
As I walked up the slope to walk along the top of the embankment, I heard two Carrion Crows alarm calling, and I could see they were mobbing something. Through the 'naked eye' that something looked remarkably like a Short-eared Owl, and when I lifted my bins, it was indeed a 'Shortie'. A surprise Shortie at that! The Crows mobbed the Shortie as it climbed to get away from the aggressive Corvids, and it headed off east, continuing to climb, until I lost it from view. 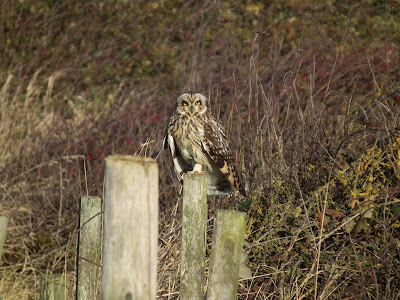 Not this morning's Shortie, but one from the same site nine years ago
It might possibly be the earliest that I have recorded locally, or for some time at least, and I wondered whether it was a failed breeder that has come down from the uplands. Then again, they are amazing birds, and an on-going tracking study by the BTO has revealed some fantastic and unusual movements. I can heartily recommend having a read about it HERE.
After that bit of early excitement, the next couple of hours were fairly quiet. A couple of Little Egrets feeding in some of the tidal pools entertained for a while, and waders were thin on the ground with just four Turnstones, three Oystercatchers, two Whimbrels south, two Dunlins, a Redshank and a Curlew. 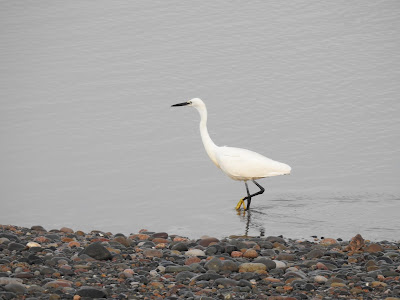 One of this morning's Little Egrets (above & below) 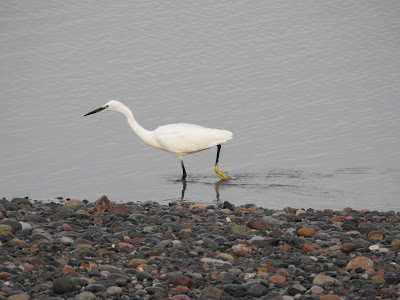 The sea was quiet, and viewing conditions were affected by a heat haze, and all I managed to enter in my notebook were 16 Sandwich Terns, five Cormorants, three adults & five juvenile Shelducks and a Gannet.
It certainly wasn't a grounded kind of morning, nor was it really a 'vis' kind of morning, as the only species that I had winging south were a group of six Swallows.
So, a morning that really failed to get going, but at least that Short-eared Owl livened things up. Looking ahead at the forecast, I'm not sure when I'll be out ringing again, but hopefully there'll be lots more birding if that pesky work doesn't get in the way. I'm not complaining.....
Posted by The Hairy Birder at 14:04

These blogs are always interesting & educational. Thanks Hairy Birder.