A Short Burst Of Vis

It seemed as though the vis was switched on yesterday morning for an hour or so at the Obs, and then switched off again, just giving a short burst of diurnal migration!

The weather started off with virtually clear skies at first light, increasing to 3 oktas by 0830. The wind was a cold 10 - 15 mph southeasterly and visibility was pretty good across the Bay. Birds were on the move from the 'off' and without further ado my totals included (all east/northeast) 28 Linnets, 136 Meadow Pipits, nine Goldfinches, a Tree Sparrow, ten Alba Wags, 48 Woodpigeons, nine Carrion Crows, 40 Pink-footed Geese, two Chaffinches, a Lesser Redpoll and a Rock Pipit. 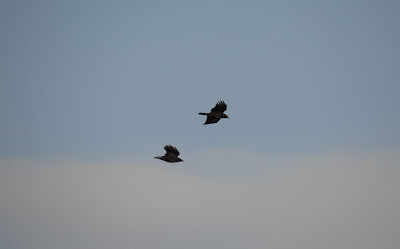 
I left more or less at high tide and there was very little in terms of waders on the beach, mainly because of the usual flushing dog walkers and two guys were flying a drone! Early on there was a nice flock of 80 Grey Plovers, and 93 Oystercatchers and 45 Sanderlings were best of the rest.

The sea was quiet with just 58 Eiders (50 roosting on King Scar island), five Auk sp. and 15 Common Scoters. Grounded migrants were even thinner on the ground with just a single Goldcrest calling from some Brambles in the dunes. 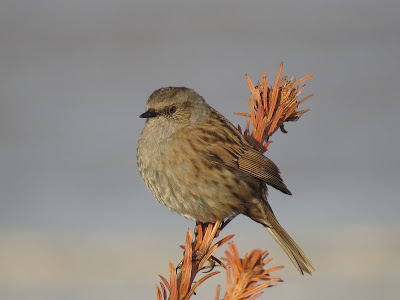 Whilst I was sea watching and counting vis this Dunnock kept perching
up in front of me and singing away!

Back home I checked my moth trap before retiring to my office for the rest of the day and all I had was a single Early Grey.
Posted by The Hairy Birder at 13:45