Although it is officially Spring, winter lingers on and migrants are thin on the ground. Since my trip north it has been quite apt that I have been finishing off a series of wintering bird surveys, because during these past couple of weeks it has certainly felt like winter!

About ten days ago I was at one of my survey sites that covers some intertidal river as well as 'bog standard' improved farmland, and it was cold with a biting northeasterly wind. The pond that I've mentioned before probably held its last Teal of the winter with a male and female still present. Soon it would revert back to a very uninteresting pond, devoid of any obvious life!

A week ago I was on one of my mossland sites on another cold day, with you guessed it, a biting northeasterly wind. It's getting busy on the moss as over-wintered stubbles are getting ploughed in, land tilled and seed-beds created in readiness for the sowing of field veg. As a consequence the habitat available to support over-wintering farmland birds is diminishing.

Lapwings are attracted to the tilled land and six present on this morning were new birds in. A flock of Linnets was holding on, but their numbers have dropped to 60 individuals and over the coming days this flock will break up further as birds move off to nesting areas.

At my second mossland site a few days later the wind had veered to the southwest and lifted the temperature somewhat, and in fact I had my first Red-tailed Bumblebee in the form of a recently emerged from hibernation queen.

Continuing the Spring theme for this morning it was great to watch a displaying Buzzard and then after one of it's climbs, stalls and dives it landed on a nest in a tree relatively close to my vantage point! On the large field to the south of my vantage point there is a wet flash and this morning a flock of 14 Black-tailed Godwits, some of them in summer plumage, dropped in to feed; migration in action!

I've carried out twelve surveys at this site and never noticed the two ornate gate posts (see below) before, even though I must have walked past them twelve times! They don't make them like that any more! 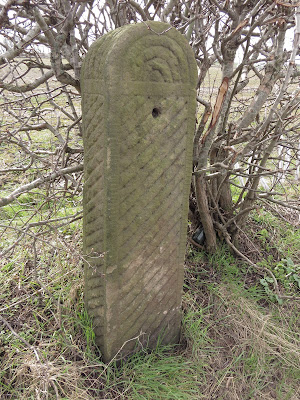 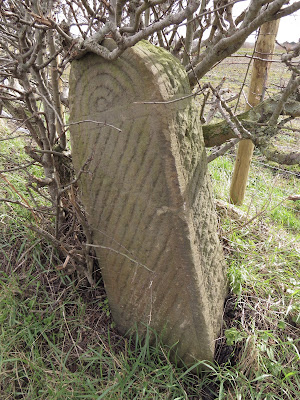