I had the morning free yesterday, so I headed to the Point for first light as there was a tide at about 0700. I was greeted with 4 oktas cloud cover and a 15-20 mph southerly wind. I headed to the end of the dunes where I could get some shelter behind the sea wall from the southerly wind, and also be able to see all around me to count any vis.

Straight away I could hear Chaffinch calls, with that of the 'Cock o' the North', Brambling to me and you, mixed in. Cock o' the North is a name given to Brambling in eastern and southern Scotland. In fact the Brambling has several common/local names and some of my favourites are Bramble Finch (one I use frequently myself), Mountain Finch, Furze Chirper & Furze Chucker (based on it's call), Tartan Back (Scotland; based on the colouration of the upperparts) and Yallawing (Northumberland).

Anyway, back to the vis! I counted 303 Chaffinches heading anywhere between east and west, but mainly south, with six Bramblings mixed in. Both my counts of Chaffinch and Brambling will be huge underestimates as these birds were literally dots in the blue yonder!

The only other birds I had on vis were 44 Starlings, two Alba Wags, eight Greenfinches and six Siskins (again a huge underestimate).

Besides training my eyes and ears skywards, I was also looking seawards as well; an attempt at multi-tasking! There was some movement at, over and on the sea and included nine Auk sp., 27 Common Scoters, six Pintails, two Guillemots, three Whooper Swans, a Shelduck, two Golden Plovers and two Gannets. 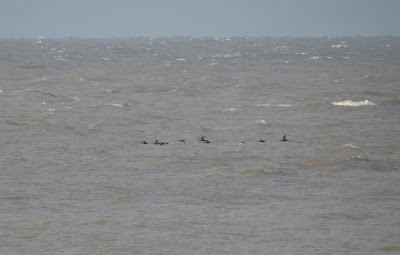 
Perhaps the best marine beastie that I had was a Harbour Porpoise fairly close in-shore. I kept seeing it out of the corner of my eye, but every time I waited for it to surface it didn't! Eventually I got onto it and enjoyed watching the surfacing with a rolling motion type thingy that they have going on!

I then bobbed into the cemetery but it was quiet in there other than a stunning adult male Sparrowhawk that 'zipped' low past me and some great migration action from a Dunnock. I watched a Dunnock calling and behaving very agitatedly, and it worked it's way up to the top of the bush that it was in. It then started calling even more, threw itself into the air and it climbed, and climbed, and climbed and headed south! Brilliant!

On my way home I called in at the Nature Park to have a look on the new scrape and already a pair of Mallards, a female Teal and a Little Grebe were on it. Other than that just a Siskin, eleven Goldfinches, 39 Coots and two Cetti's Warblers found their way into my notebook. 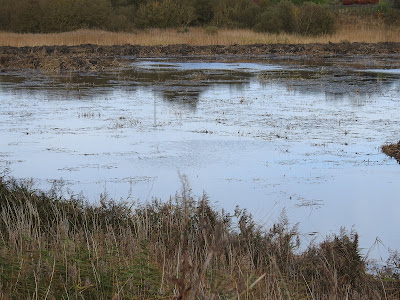 The new scrape (above & below). It looks a bit brutal at the moment, but
once it has settled a bit it will provide some great habitat for waders and
wildfowl. 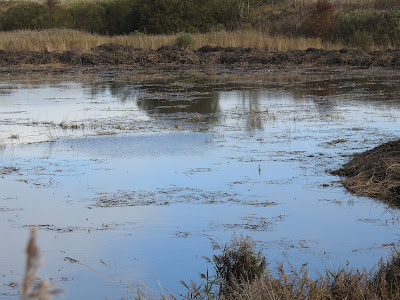