At weekend Alice and I had a ringing session at the Obs in the willow scrub and reedbed of one of the wetlands. The morning dawned with clear skies and there was very little wind, perhaps just the hint of a northeasterly.

We got there in the dark with the aim of trying to catch and ring a few Thrushes. We did ring one continental thrush, in the form of Blackbird, but unfortunately the Fieldfares and Redwings weren't playing ball. A handful were attracted to the MP3 players, but that was it.

Greenfinches were the main ringing feature of the morning, and I commented that it was "Greenfinch city", and Alice said is that going to be the title of your Blog, and it is! Because of prior engagements in the afternoon that we both had (me making final arrangements for Gail's birthday party that night), we had to pack up whilst we were still catching, but nevertheless we managed to ring 54 birds as follows (recaptures in brackets): 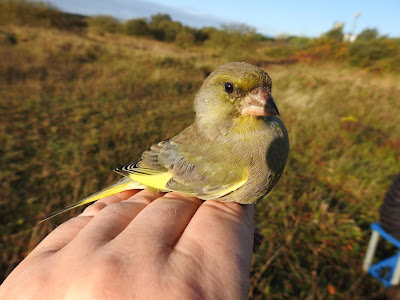 From a birding perspective because we were busy ringing we didn't see a great deal other than 65 Jackdaws, 580 Pink-footed Geese and a female Stonechat.

I was in north Cumbria carrying out tree assessments all day at several sites and it was obvious that there was quite a large arrival of thrushes as I was seeing mainly Redwings and smaller numbers of Fieldfares at all of the five sites that I visited from Penrith to the Solway to the Northumberland border, and everywhere in between!

Fingers crossed I'll be out for a couple of hours tomorrow morning at the Obs.
Posted by The Hairy Birder at 20:18