I think I've probably said before, but there has been a good berry crop this year (and nuts), and the hedgerows are still full of Hawthorn berries, and consequently lots of thrushes. It's quite unusual for us in my neck of the woods to still have numbers of Fieldfares around. Redwings can generally be found all winter, but Fieldfares tend to pass through in late Autumn, then you get them again in late winter/early spring when they are on return passage, and can often be accompanying Starlings.

I think the glut of berries is holding them, and I guess it will be the same for other parts of the country, and it's providing an opportunity to enjoy these stonking thrushes all the more. I was at one of my winter bird survey sites in west Lancashire yesterday, and from my vantage point I recorded 239 Fieldfares and 92 Redwings. 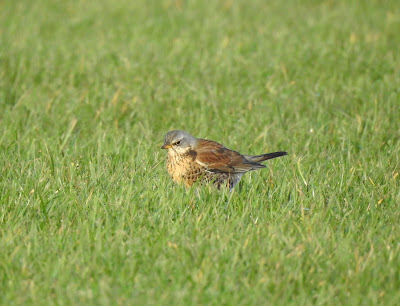 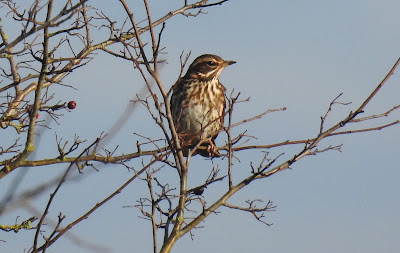 I say recorded, but I really mean that I enjoyed them, I was immersed in them, I was dazzled by them, enthralled by them...and amazed by them. There aren't enough superlatives to describe the many facets of being 'with' thrushes. I say 'being' because they were all around me; whizzing over my head, calling nervously from hedgerows, plucking berries, flying around 'schacking' and 'tseeing' and vigorously probing the sheep pastures for soft-bodies prey items with Starlings.

The thrushes were most certainly the highlight of my afternoon under leaden skies with a cold southwesterly wind. Eventually I had to bring my survey to an earlier end than intended, as a band of rain moved through. I stuck it out until me, my maps and optics were sodden, and retreated to the relative comforts of my car.

A quick scan of my notebook reveals that I also had thirteen Chaffinches, a Skylark, a Jay, a continental male Blackbird, two Buzzards, six Curlews, seven Collared Doves and 136 Pink-footed Geese. But still it was the thrushes!
Posted by The Hairy Birder at 12:09