The first hour, or perhaps hour and half, was probably the best off the Point this morning. I didn't get there until 0620 and was greeted with 6 oktas cloud cover and a 20 mph SSW wind. The visibility was fairly good unless some squally showers were blowing in to the bay.

Walking to the point I had three Grey Plovers in full summer plumage on the beach and I was about to take a picture of them when they flew off. Grey Plovers are one of my favourite waders; stunning birds! As the tide dropped a few other waders dropped in including another Grey Plover, 41 Dunlins, four Turnstones, four Sanderlings and 47 Ringed Plovers. 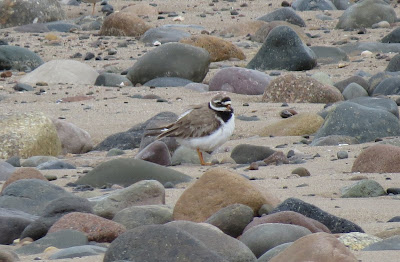 There was quite a push of Manx Shearwaters and Gannets this morning and I had 126 and 53 respectively heading west out of the bay. There were good numbers of Terns roosting on the shingle spit and when the tide pushed them off Ian managed to count them and we had 178 Sandwich Terns, 35 Common Terns and a single Arctic Tern. Later in the morning the Tern totals were added to by a single Little Tern generally heading out of the bay but pausing to feed as it moved along.

Wildfowl were represented by 36 Common Scoters, a Tufted Duck and three Eiders. Only two skuas this morning and these were a single dark morph Arctic and a Bonxie. The Arctic spent the morning harrying the Terns and at one point I watched it chase a couple of Terns and then the two Terns chased it!

An Atlantic Grey Seal put in an appearance later in the morning and the only vis was eight Swallows west. 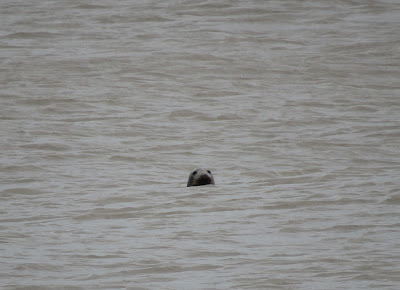 It's going to be fairly windy, but dry, again tomorrow so it will be a spot of sea watching again for me.
Posted by The Hairy Birder at 11:58