Yesterday morning I had a mooch round the Obs and at first light I had full cloud cover with a 10 mph southeasterly wind. There was a little vis (all south unless otherwise stated) and this included a Blackbird, two Fieldfares, four Chaffinches, 80 Woodpigeons northeast, a Reed Bunting, two Skylarks (and then dropped on to beach), seven Greenfinches and two Goldfinches. 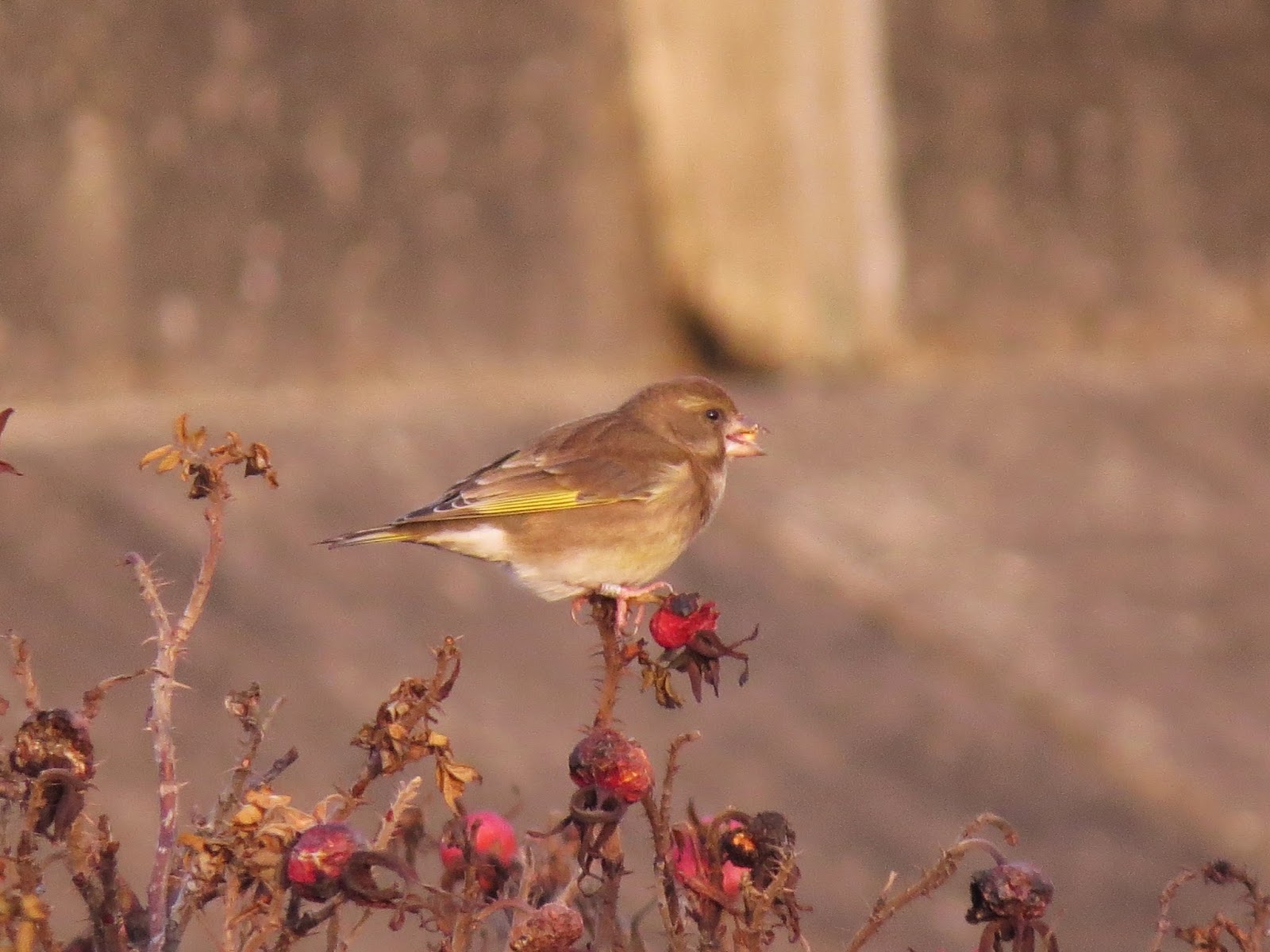 There seemed to be a few Thrushes grounded in the form of a Mistle Thrush, a Fieldfare and three Song Thrushes. There were a number of Blackbirds around but it wasn't obvious whether they were freshly grounded or not.

Pink-footed Geese were arriving from their roost on the estuary, 1,392 in total, but someone was shooting at them as they were coming in to the farm fields. In fact there was a lot of shooting going on and I could see huge numbers to the east being disturbed through shooting. I'm not anti-shooting per se and if someone shoots a goose to eat rather than buy some factory reared chicken from a supermarket then that's okay by me. However, I'm not in favour of people shooting for a giggle, particularly fantastic migratory species like Pink-footed Geese. And in cases when people are shooting for a giggle I don't understand how they can gain pleasure from killing something for a laugh, and perhaps it says something about their personality! 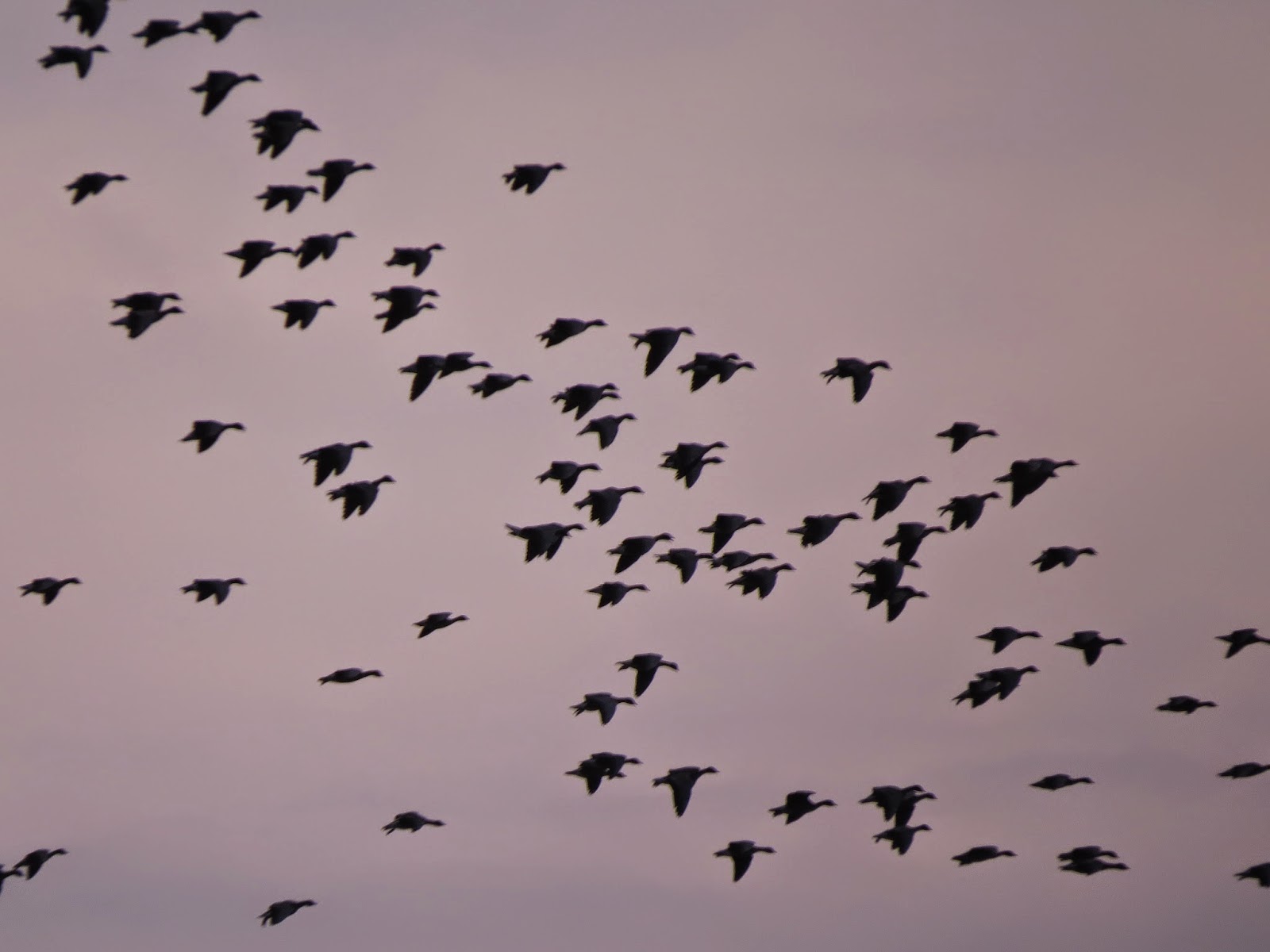 Pink-footed Geese arriving to be shot at!

A Little Owl perched at the top of a down spout was a pleasant distraction before I had a look on the sea. The sea was fairly quiet other than 33 Common Scoters, two Great Crested Grebes, eight Cormorants and twelve Shelducks. 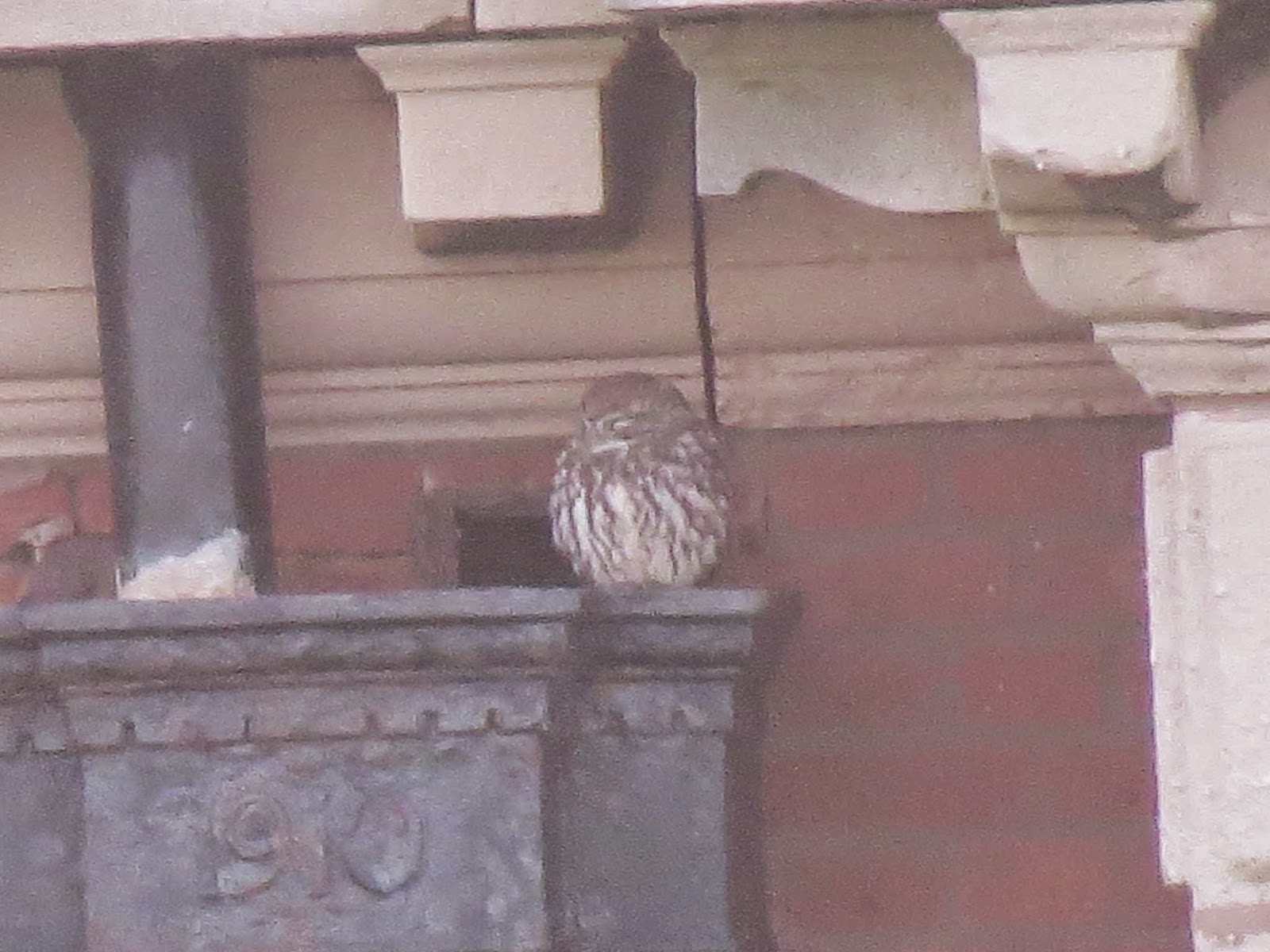 I then headed to my feeding station to feed in preparation for this morning's ringing session. A total of 52 Tree Sparrows were present plus two Yellowhammers and a Corn Bunting. 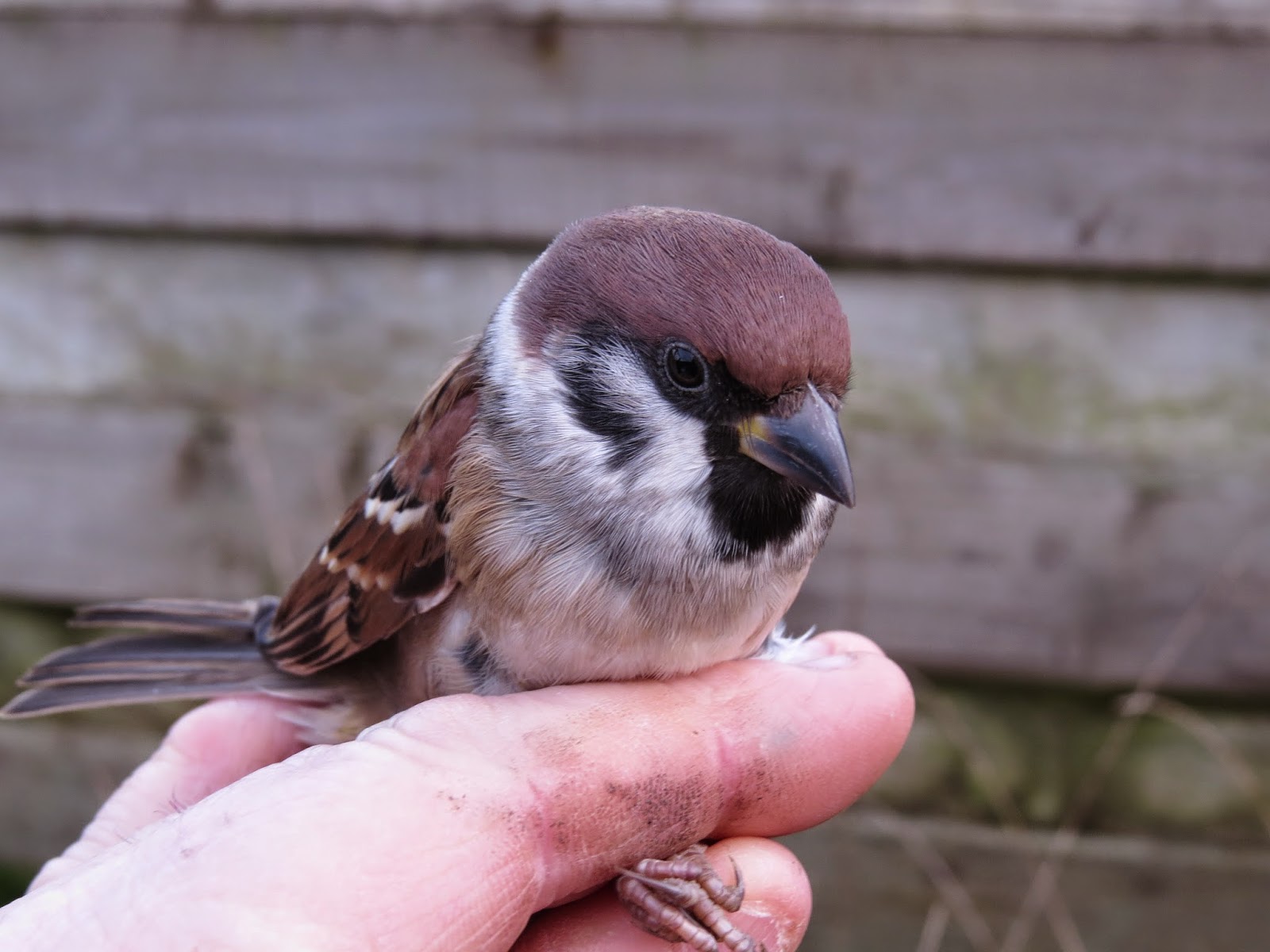 This morning I met Huw and Aimee at my feeding station just as it was coming light and we put two nets up in cloudy and calm conditions; perfect for ringing. As ever at the feeding station the aim is to try and ring red-listed farmland birds and we didn't fail this morning but the numbers weren't high. We ringed 19 birds (recaptures in brackets) as follows: 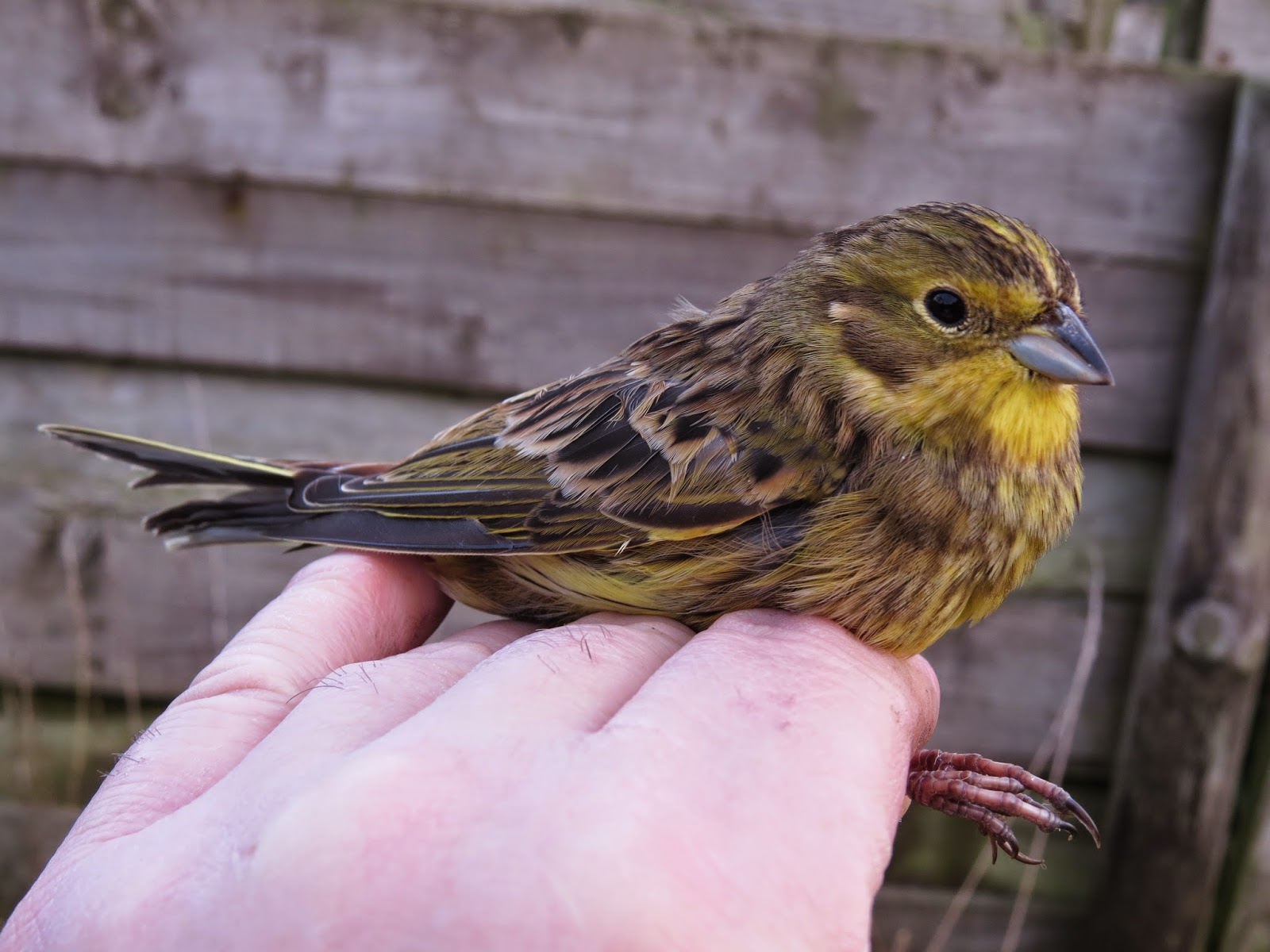 Whilst we were putting the nets up in the 'half light' a male Tawny Owl called from the wood and we flushed five Grey Partridges from where we set up our ringing station. Other species recorded whilst birding between net rounds included 14 Fieldfares, a Buzzard, 230 Jackdaws, four Yellowhammers, a Grey Wagtail, eleven Skylarks, a Corn Bunting and a Siskin.

On my way home I called in at the flood and the two Green Sandpipers had been joined by three Redshanks. There's a tide in the morning so I might have an hour at first light before locking myself in my office for the day!
Posted by The Hairy Birder at 21:58

Does your feeding station not attract Linnets ?

Funnily enough it doesn't Warren. And what's interesting is that when the farm used to be in Higher Level Stewardship and had wild bird seed mixtures there was sometimes large numbers of Linnets in these, but they never come to the seed I put out at the feeding station. Whether the close proximity of the hedge puts them off and they prefer more open areas to feed in, I'm not sure. An interesting observation!