I had a couple of hours to spare this morning, well perhaps not to spare, more rather hard won, and I decided to see if there were any migrants around at the Obs. At first light I had full cloud cover with a strong southeasterly wind.

The wind was a bit of a problem actually as it was moving the vegetation around to some considerable degree, making searching for passerines difficult at two of my favoured spots. Because of this it was difficult to tell whether it was quiet, or whether it was the viewing conditions making birds seem thin on the ground.

My first port of call was the cemetery, and the Sycamores along the west side so favoured by Yellow-browed Warblers resembled windmills rather than trees in the strong wind. The south side was more sheltered and this is where five Goldcrests and three Chiffchaffs were hanging out. An immature male Sparowhawk and a few Meadow Pipits overhead made it in to my notebook. 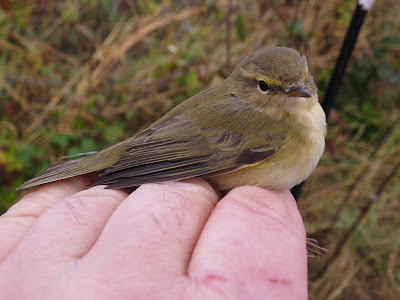 Chiffchaff. I didn't take any pictures this morning and this shot of a Chiffie
in the hand was the only picture I had taken at this time of year!

Next port of call was the coastal park and this was slightly more sheltered with actually slightly less birds! Three Goldcrests and just a single Chiffie was all I could muster.

The weather synopsis for this evening in to tomorrow morning looks interesting with a band or rain moving rapidly through from the west, that peters out in the early hours. There's a chance that it could drop a few migrants in, but the chance of me rolling out of my pit early is slim as I'm out for a few beers this evening!
Posted by The Hairy Birder at 12:45