At this time of year it isn't a chore to get up to be out by first light. My alarm went off at 6:15 a.m. and by just after 6:30 I was ready to go out and it was still dark. So I picked up my latest copy of Scottish Birds and sat down to read for a bit waiting for it to come light. The next time I looked out it was virtually light and it had gone from dark to light by what seemed like a flick of a switch!

I headed to the Point to have a look at the sea on the incoming tide and record any vis. It was murky out in the Bay to the north and this had the effect of more or less curtailing any vis. Ian was already in position in front of the tower, and I joined him to shelter from the keen south-southeasterly wind.

As I mentioned before the vis was nearly non-existent and all we had was 45 Meadow Pipits and an Alba Wag! The sea was nearly as quiet with just five Shelducks, six Red-throated Divers, a Red-breasted Merganser, a Gannet, five Auk sp., 18 Cormorants, two Guillemots and an Eider. 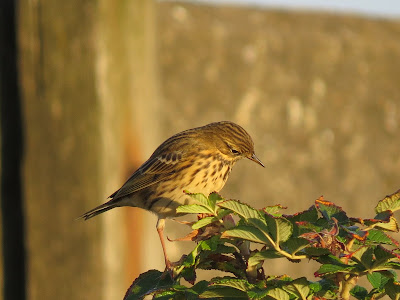 There was quite a passage of Black-headed Gulls west out of the Bay and when I joined Ian he said that he had already recorded at least a thousand! All I manged was 116!

A male Stonechat on the edge of the dunes was the only thing that resembled anything grounded. On my way home I had a look in the cemetery, but conditions were challenging searching for grounded migrants in the blustery weather and all I could find were five Goldcrests and a single migrant female Blackbird.

So the plan for tomorrow morning is to get up five minutes later, then I won't be tempted to read something, and I'll be out earlier. That appeals to me, that does!
Posted by The Hairy Birder at 20:17