When the West Wind Blows

It was blowing a hooley this morning and as such I headed to the tower for a sea watch. I suppose in the back of my mind I was perhaps expecting a Leach's or two, but thinking about it the 'blow' picked up too quickly and blew its self out just as quick. The depression was a rapid affair that had speedily crossed the Atlantic, and it looked better for an American vagrant than a wreck of seabirds. The former has already proved correct with an American Cliff Swallow on Scilly this morning!

It's not very often that you write wind WSW force 8 - 9 in your notebook, but that's what it was this morning and with full cloud. Squally showers kept dancing across the bay, some making landfall and causing a brief replacing of lens caps on Scopes until they passed, and others just skated across the angry sea. 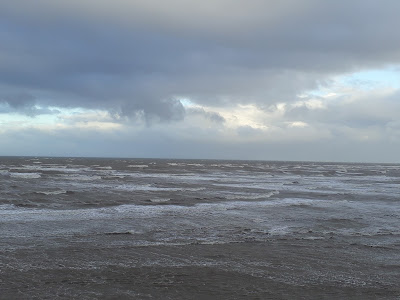 The view from the tower this morning

As I walked along the eastern edge of the golf course heading for the front I heard a Goldcrest calling from the scrub! And on my return walk as I headed home I had a male and two female Stonechats in more or less the same place. It certainly wasn't a morning for passerines, but Skylark and Meadow Pipit also made an appearance trying to head west, whilst being pushed quickly backwards!

There was some movement on and over the sea including 28 Gannets, 9 Kittiwakes, 26 Common Scoters, two Red-breasted Mergansers, thirteen Cormorants, six Auk sp., a Sandwich Tern, two Little Gulls, a Red-throated Diver, a Guillemot, an Eider, two Arctic Terns and a lone Pink-footed Goose!

Walking, or should I say being blown back, to my car a few waders were trying to shelter over the high tide behind some of the shingle ridges and there was a group of 40 Turnstones, 80 Sanderlings and 27 Ringed Plovers.

The wind is easing overnight to a 25 mph northwesterly. Not an ideal wind direction off this part of the coast, but as there's a morning tide I'll have another look.
Posted by The Hairy Birder at 18:54