I was surveying on some deepest, darkest mossland this morning and it was the first morning that you could say that it was actually cold. When I arrived at my survey site there was a ground mist and lateral visibility wasn't brilliant to say the least, but vertically it was crystal clear which meant birds were still on the move. 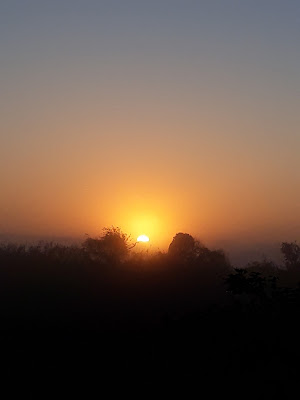 That orange ball soon cleared all the low lying mist

The mosslands aren't everybody's cup of tea as in Lancashire they are usually used for intensive agriculture, mainly field salad and veg, and where I was today was no exception. However, it is the big skies that lend these areas some wildness. I also like the habitat islands that you find. When I say habitat island it could be a group of Birch trees for example surviving along a track, and they are indeed islands in their position and richness within the surrounding agricultural landscape. 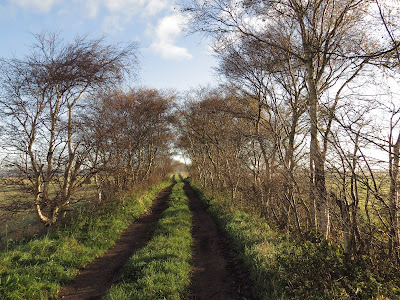 An island of Birch in a mossland sea

The main theme of the morning was the 'vis' but this was a tad limited, or the birds were so high they were out of my sight and hearing range. Skylarks were a good example; I could hear them calling, but often I couldn't see them. They were somewhere coasting in the stratosphere.

A few flocks of Pink-footed Geese were on the move, scribbling across the sky like a spider dipped in ink and running across the page, a page of crystal clear cobalt blue! Continuing the wildfowl theme I had three parties of Whooper Swans (10/4/4) heading south, announcing their presence by their loud bugling calls. Magic!

As I said before there was some vis. Interestingly some of the Skylarks were heading north into the light northerly wind. My vis totals, irrespective of direction, were as follows; six Tree Sparrows, four Alba Wags, 68 Woodpigeons, two Chaffinches, a Magpie, 45 Skylarks, 161 Jackdaws, a Linnet, 85 Starlings, four Meadow Pipits, a Reed Bunting, six Carrion Crows, 11 Goldfinches, four Redwings and a Greenfinch.

The only raptor I had this morning was a female Sparrowhawk that coasted over a small area of wild bird seed flushing 45 Goldfinches and 15 Linnets in the process. I thought I might have had a few more thrushes this morning, but other than the Redwings all I had was seven Blackbirds, a Fieldfare, three Song Thrushes and three Mistle Thrushes.

I came across a flock of 13 Lapwings on a small flood and there was no way of approaching them without flushing them, which was a shame because the light was perfect in my head I thought I could have got a cracking photo. The problem there is that it was all theoretical and I hadn't factored in my lacking photographic skills!

It was nice to hear a Corn Bunting singing from, where else, some telegraph wires and that brought to an end a pleasant job of work! 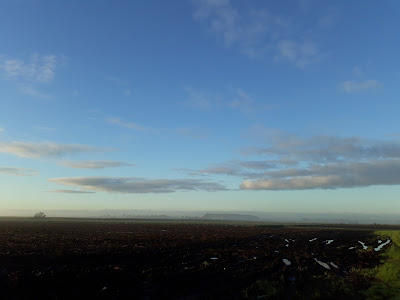 Big skies
Posted by The Hairy Birder at 20:26