The Birding Highs and Lows of Ophelia

The press has been full of reports of the damage and sadly loss of life that ex-hurricane Ophelia wreaked upon the UK, particularly Ireland, Wales and southwest Scotland. Luckily here in northwest England we escaped the full force of the storm, but when I went out sea watching at the Point yesterday it was still a force 9 southwesterly!

I was at the tower for first light and was soon joined by IG and GH, and later AD. The first bird I had was a dark morph Arctic Skua shearing west, but sadly it was some way out. We had another two Arctic Skuas, and these were followed by both Great and Pom. We had three Bonxies head west and then at 1140 whilst I was on the phone to my Doctors I heard IG shouting for me to get back up quick. Two gorgeous Pom Skuas were heading west and they were close in. Both were adults; one was in winter plumage and the other was a full summer bird with spoons! Stunning!

As might be expected we had a few Leach's Petrels heading out of the bay and we had 2, possibly 3. We weren't sure whether the third bird was the second bird that had gone into the bay and was coming out again or not. The best of the rest included 13 Common Scoters, four Red-breasted Mergansers, nine Kittiwakes, an adult Med. Gull, a Little Gull, five Whooper Swans, two Auk sp., 13 Shovelers (yes 13 Shovelers - we don't get anywhere near that number at the Obs all winter!), eight Pintails, three Eiders and a Guillemot. Sea watching never ceases to amaze me, what were 13 Shovelers doing heading west in to a force 9 storm?! 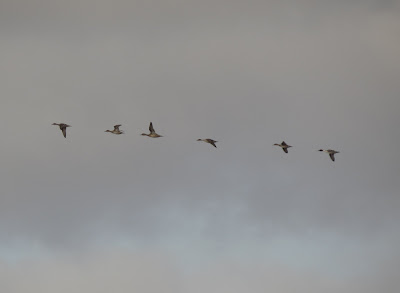 These were the birding highs. The birding lows were represented by a mystery Petrel that flew west at about 0815. I picked it up about half way out, tracking west, and getting closer all the time. I called it as a Petrel sp. as I didn't think it looked like a Leach's, but I wasn't sure what it was! IG and GH were soon on to it and we watched it for about 3 - 4 minutes, before we all lost it. It was struggling to fly against the wind and kept being blown back before pushing on again. It could only be either a Storm-petrel or a Wilson's Storm-petrel! Factors against it being a Wilson's were that we couldn't see the toes projecting beyond the tail and we couldn't see any short pale panels on the upper wing. Having said that, I couldn't see the long pale panels on the upper wings of any of the 2/3 Leach's we saw either, as we were viewing in pretty horrendous conditions. The main and only factor for it being a Wilson's was that we couldn't see a broad white band on the under wing, which it would have it was a Stormie. And we saw it well enough to see this feature if it was there, as we have all seen numerous Stormies in varying conditions and have always been able to see the under wing bar. It had a broad white rump and a square cut tail, and that was it. It wasn't a Leach's, I don't think it was a Stormie, so what was it?

The only other interesting thing was that even in the gale force winds I picked up two Meadow Pipits coming across the bay and they made it, making landfall on the golf course!

It was a vis kind of day this morning and I did a bird survey for work, but more of that later.
Posted by The Hairy Birder at 15:22