Some Migration At Last

First of all I need to apologise for a lack of recent updates. This isn't for the want of trying, but mainly it's because most of my birding in October so far has been work related (start of wintering bird surveys), and it's been uninteresting or site confidential, so it's great to be able to report some migration at last! Generally the month has been dire here on the Lancashire coast, whilst north, south and east of us have been having good birds!

This morning I headed to the Point at first light with 6 oktas cloud cover and a force 3 south-southeasterly wind. The first entry in to my notebook was sadly a dead Harbour Porpoise washed up on the beach. By the chunks of flesh missing from it's neck, I would guess that it had been hit by a boat's propeller.

The skies cleared to probably 3 oktas soon after and by 0945 had become 8 oktas. The clear skies got some 'vis' going and a feature was the number of Pink-footed Geese coming across the bay. Due to the fairly brisk southerlies that they were flying in to, they were often coming in low and in total we had 2,523. I say we as I joined Ian on top of the dunes where we could monitor the vis and look out to sea. Mind you with murk in the bay sea passage was next to nothing. 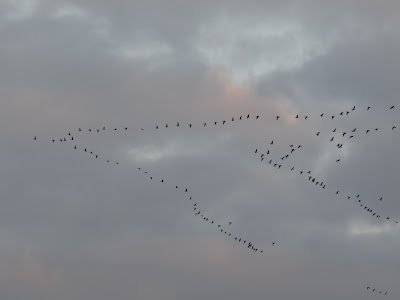 The other vis records included four Chaffinches (probably a lot more than this), eleven Reed Buntings, 44 Meadow Pipits, eleven Skylarks, three Magpies, 25 Alba Wags, three Rock Pipits, 64 Greenfinches, 21 Linnets, 17 Starlings, 18 Goldfinches, 53 Carrion Crows, two Mistle Thrushes, three Swallows, a Woodpigeon and six Rooks (could have been more). Some of the birds were coming in off the sea, such as Linnet and Starling; migration in action!

There was even a few grounded migrants with four 'agitated' Dunnocks, a Wheatear and a Chiffchaff that dropped out of the sky into some vegetation in front of us! As I said earlier the sea was very quiet and the best of next to nothing was a female Scaup that flew west. Other than that it was a single Red-throated Diver, ten Eiders and five Shelducks.

I had a look in the cemetery on my way home and was treated to a bizarre site of a Song Thrush being mobbed by a Grey Wagtail. The Songie had come out of Sycamores and was circling to gain height before heading off south no doubt and the Grey Wagtail was giving it a serious mobbing. I've never seen that before! A few continental Blackbirds and a party of eleven mobile Long-tailed Tits that had started at the coast and worked their way inland was all I could add.

The weather conditions are not fit enough for one of my wintering bird surveys tomorrow, so I might just get out for a couple of hours first thing.
Posted by The Hairy Birder at 17:57