Some Ringing At Last

Yesterday morning at the Obs I headed to one of the reedbeds just before first light to do my first ringing since September! In fact it was the first morning that I had seen a frost this autumn, but it wasn't that heavy, just a light and brief dusting. Skies were clear and it was calm, something that it hasn't been for some time!

Being a birder of a certain age I still have to pinch myself every time I hear a Cetti's Warbler, and I hear them an awful lot now, and this morning was a classic example, a Cetti's calling from a frosty reedbed in Lancashire!

There was quite a few Pink-footed Geese moving around this morning in all directions, some obvious arrivals from the north and other birds moving from their roost site to feeding areas. The 5-600 logged in my notebook is probably a gross under estimate, but I was quite busy ringing this morning so couldn't always look up!

When I was putting the nets up a number of Fieldfares and Redwings were moving amongst the reeds and willows, perhaps 30 and 15 of each respectively, and I did wonder whether I would catch any, and I did. In total I ringed 31 birds as follows (recaptures in brackets): 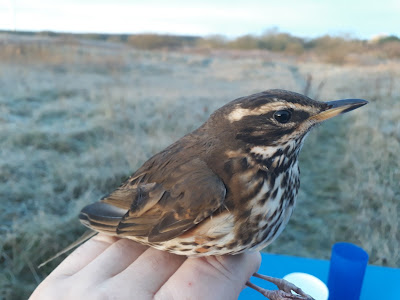 In addition to the Pinkies there was some vis involving Fieldfares, Redwings, Song Thrush, Jackdaws, Woodpigeons, Brambling, Greenfinches, Meadow Pipits, Carrion Crow and Linnets. However, my counts are woefully low as I said earlier, so I haven't bothered to report them here. 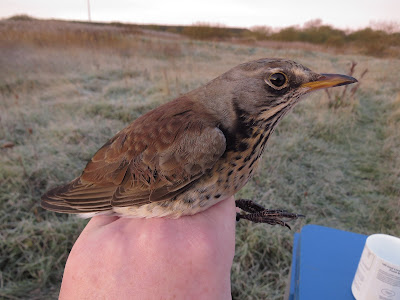 It's looking okay for some ringing later in the week at the Obs so hopefully I'll be out again. Twice in one week, what's going on?!
Posted by The Hairy Birder at 21:22