..........it's hard to find any shelter at the Point and the sea watching isn't so good either! It was a northwesterly when I joined Ian at the Point yesterday morning. The only shelter we could find was alongside the western elevation of the tower, and that wasn't brilliant. There was a near complete cloud cover and squally showers periodically raced in to the bay.

I only saw the male Stonechat as I walked towards the front. He was trying to forage in an open area but was continually getting battered by the wind. I'm guessing he's left over from a fall of migrants a few days ago, as was probably the Wheatear that I had on the beach as well.

As I hinted at earlier, and as I have said many times before, a northwesterly isn't any good on this stretch of coast for sea watching, although this morning there was one or two highlights, including the first Brent Geese of the autumn. The sea produced seven Common Scoters, 79 Cormorants (including 40 on the offshore island), two Red-throated Divers, eight Gannets, three Brent Geese, three Guillemots, seven Kittiwakes, seven Eiders, two Canada Geese and an Auk sp. 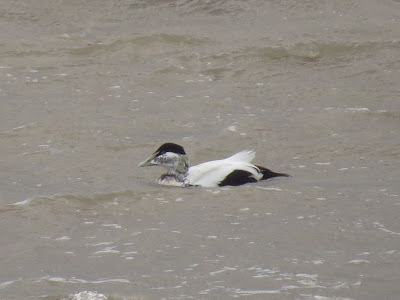 This male Eider was struggling to stay off the shore and it looks to have some
oil on its head and neck. fairly recently there was an oiling incident along this
stretch of coast that required cleaning up.

There was a few waders on the shore including 395 Oystercatchers (190 on the offshore island), 15 Turnstones, 13 Sanderlings, three Ringed Plovers and eight Knots. Surprisingly there was even a bit of vis in the form of 15 hardy Meadow Pipits that bravely battled west against the strong northwesterly! 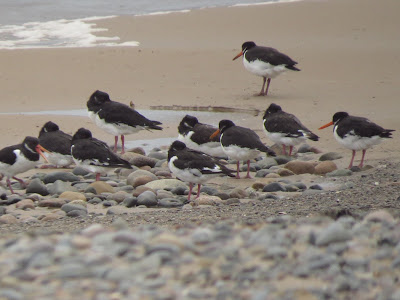 I've got a couple of site visits for work tomorrow, so it could be Friday before I'm back out on the patch again.
Posted by The Hairy Birder at 19:32