It was chilly yesterday morning at the Point with a 15 mph northeasterly wind, nearly full cloud cover and occasional showers. Ian and I took shelter on the western side of one of the buildings overlooking the dunes.

The first bird I recorded before I got to the buildings was a Kittiwake that flew along the tide line as I walked along on top of the dunes, and this was the only Kitti of the morning. A Grey Wag over calling was the first of four, and due to the weather conditions (blocking cloud to the north) the vis only consisted of two Skylarks and five Meadow Pipits!

I purposefully left out the arrival of Pink-footed Geese from the above vis totals as they were the main feature of the morning, besides some limited action on the sea. Pinkies were continually moving south and southwest all morning in generally quite small skeins. Some were very high, others low, and some looked truly spectacular with the Lakeland fells as a backdrop! I counted 1,116 in a couple of hours. 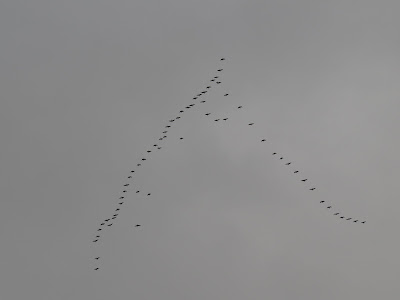 Some of the Pinks arriving

The sea was the other feature of the morning, and despite the winds being northeasterly there was always something to keep us interested. We had eleven Sandwich Terns, four Shelducks, four Red-breasted Mergansers, six Common Scoters, 16 Red-throated Divers (some in full summer plumage), three Guillemots, 13 Pintails, two Gannets and a Great Crested Grebe. 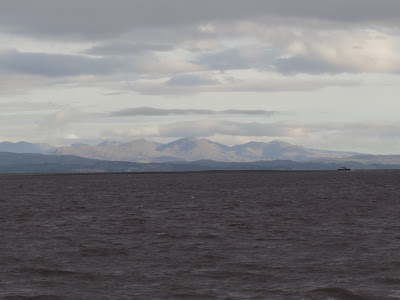 Looking across the bay to the Lakes

I've got another busy week ahead of me in the office I'm afraid, but once I get to next weekend things should be slackening off and hopefully it will be a month long period of daily birding!
Posted by The Hairy Birder at 11:55