Last weekend the weather was horrendous; cold northerly winds both days with wind driven showers all day long! I didn't venture out as I couldn't motivate myself because of the weather. And then during the week Murphy's law kicks in and the weather is rather cold, but pleasant, and my birding is all to do with work.

My week kicked off with a fairly pleasant visit to some estuarine and associated habitats on a fairly overcast day, with the ever present north-northwesterly wind. This was my fourth visit to this site and my transect goes past a pond in some improved pasture, grazed within an inch of it's life and I haven't recorded anything on this pond to date. However, this time as I approached it I could hear the tinkling call of Teal and to my delight and surprise 26 of these cracking little ducks were on the pond!

I recorded one or two raptors on my survey and first up was a Merlin that I only got on as it headed high to the west across the fields. A Kestrel and a Sparrowhawk were also recorded as were eight Buzzards!

Out on the estuary a flock of 150 Lapwings and 354 Curlews was noteworthy, and I never get tired of Little Egrets, so eight in my notebook was a bonus as far as I'm concerned.

The following day I was out at first light on some intensive agricultural mossland. Pink-footed Geese were moving from their roost to feeding areas and 356 gave me a fly-past against frosty blue skies. Just thinking about the ground frost a Bumblebee that flew past me was a complete surprise! 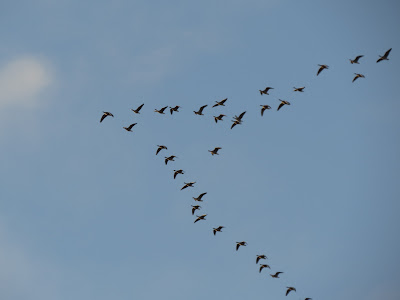 I had 14 of the Pink-feet's northern cousins, Whooper Swans, again moving from roost sites to feeding areas and like yesterday a few Buzzards, but this time just three. However, one of the Buzzards gave me a start for a quick second as it was a leucistic bird, and I had one of those "what the f*ck was that" moments as I scanned past it with my bins!

The finch flock out on the stubbles had reduced to just 41 and 10 respectively of Linnet and Goldfinch, and there was no sign of the Stonechats; presumably moved on by the cold weather. A flock of 33 Skylarks and a female Sparrowhawk rounded off the morning. 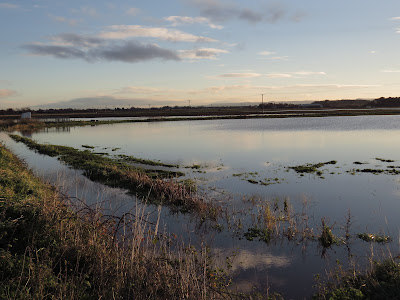 My third survey in as many days was on some more agricultural mossland. A species that doesn't usually make it in to my notebook did this morning as on some stubbles was a flock of 101 Feral Pigeons and 20 Stock Doves. I had a few Thrushes on this morning in the form of six Mistle Thrushes, nine Blackbirds and twelve Fieldfares.

I then had a couple of days surveying within some improved pasture and hedgerows, and nothing really stands out to tell you about. The coming week is full of more survey work, but I am really desperate to get on the patch now! In fact I was sorting some mist nets out on my drive this afternoon, so let's hope I get chance to use them next weekend!
Posted by The Hairy Birder at 21:21