I was undertaking a winter bird survey on some moss land in west Lancs yesterday and even though it was a cold grey day, I did quite enjoy myself.

As my blog title suggests Mistle Thrushes were a feature of the morning and I recorded 6 of these large, vocal thrushes. In fact one bird was singing, defending a winter feeding territory, and their singing during inclement weather in the winter months earned them their name of Stormcock! 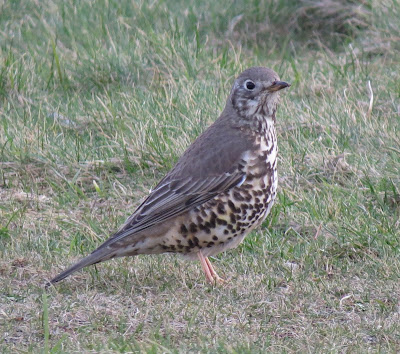 Other Thrushes that I encountered during my survey were 36 Redwings, five Blackbirds, a Song Thrush and 67 Fieldfares. The Fieldfares and Redwings were associating with some finches feeding in a large field, and the finches included eleven Linnets, a Corn Bunting, 60 Chaffinches and a Yellowhammer. There was probably more of each species, but it was difficult to see into the field properly.

There was little in the hedgerows, although a flock of ten Long-tailed Tits was nice, and raptors were represented by a single Buzzard and a male Kestrel. A number of Pink-footed Geese were flying to and from feeding areas and I had 540 fly over my watch point.

On this day in 1993 I was ringing at a winter roost site we had then, in the grounds of a stately home. My notebook tells me that we recorded at least 400 Chaffinches roosting and ringed 63 birds including 53 Chaffinches and three Song Thrushes. I wish we could go back to those days!
Posted by The Hairy Birder at 12:55