From Inland Cheshire To Coastal Cumbria

Over the past two days my birding has been work based and they have been completely different; inland Cheshire yesterday and coastal Cumbria today!

It was a beautiful day yesterday everywhere it seemed, other than my survey site that was fog bound! On the drive down it was glorious until I got near my site, and then on the return journey foggy until a few miles from the site where it was glorious again! It was one of those mists where horizontal visibility was compromised, but not vertical! 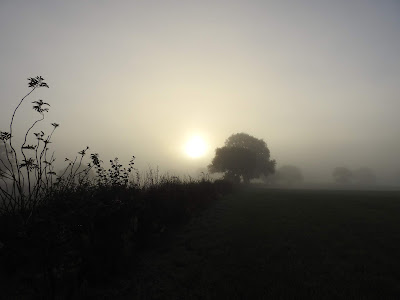 The sun was trying it's best to make an appearance!

I did have a few birds at my misty Cheshire site including five Song Thrushes, which were almost certainly migrants. No Fieldfares or Redwings though! A Buzzard was ever present as usual, but the best bird of the morning was undoubtedly a Little Owl.

I could hear Blackbirds and Chaffinches alarm calling and I approached the area where I knew that they were scolding a predator of some sort. I looked through a gap in the hedge and perched up on a post was a Little Owl. It was really close, and soon spotted me and sadly flew off. It still put a spring in my step though!

The site holds a population of Tree Sparrows and I had five on this morning. A flock of seventeen Long-tailed Tits moving along a hedge was nice, and these were really all the highlights.

Gail and I were at a site in northwest Cumbria today, and if it wasn't for the relatively murky conditions, the views across to Dumfries and Galloway and down to the Isle of Man would have been superb. The site is on the coast and today's visit was just to plan my transect route and VPs (vantage points), so I wasn't really recording my sightings thoroughly. Of interest we had 33 Skylarks, eight Linnets, a Rock Pipit, four Stonechats, two Ravens and a nice covey of six Grey Partridges. I didn't look on the sea today, but when I start the surveys soon I will be doing. 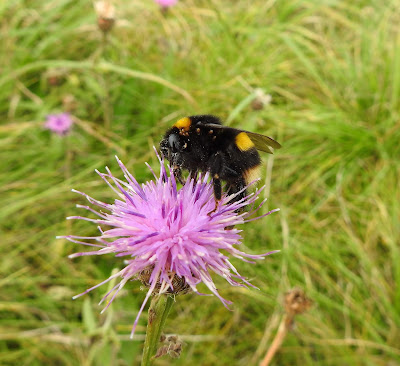 Queen Buff-tailed Bumblebee. It was nice to record this today and I have
had one or two in my garden over recent days

Tomorrow I'm hoping to get out ringing at the Obs, but I'm leaving it until the morning to make a decision as the forecast is marginal in terms of wind strength. I'll let you know if I do!
Posted by The Hairy Birder at 20:42