Not In The West Yet

This morning Graham and me got to the pools at the Obs early to get a couple of nets up in the dark to hopefully ring some thrushes. Large numbers of Redwings and Fieldfares are appearing at watch points further east, but they have yet to get this far west. There has been a few, but none in any numbers. Last night I kept going outside to listen for Redwing, but I didn't hear a single one, and it was the same this morning when I was loading my car.

We had six oktas cloud cover with a 10 mph southerly wind throughout the morning. As soon as the nets were up I put Fieldfare and Redwing on the MP3 players. A few Redwings started arriving in response to the MP3 players, but not in any real numbers, and in fact I think they were only just in double figures!

We ringed thirteen birds as follows: 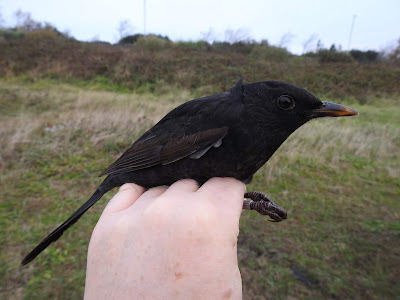 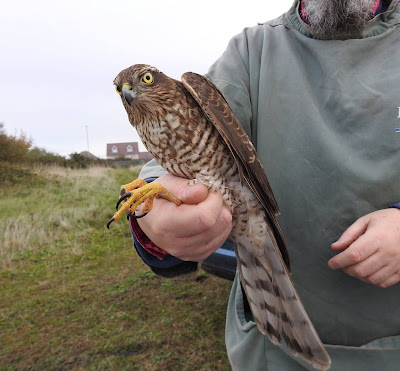 The birding was quiet as well this morning as you might have gathered and there was very little going over, other than perhaps 15 Redwings, a Song Thrush, two Bramblings and a handful of Chaffinches. Pied Wagtails were dispersing to feeding areas from their overnight roost on the marina, and a few Reed Buntings 'dropped in' to investigate the MP3 calls. Five Stock Doves and a male Shoveler dropping on to the pools, and that was it! 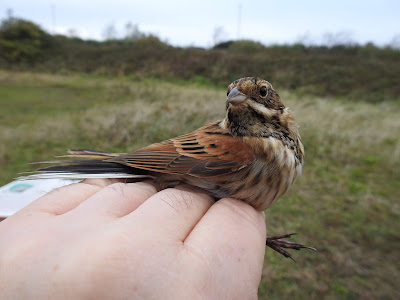 It's a funny old forecast for tomorrow with the wind remaining southwesterly and some light rain coming in during the morning. I've had three early starts on the bounce and I have an early start on Monday as I am heading up to southwest Scotland to do some work. However, on Tuesday I am hoping to be birding on the Solway, so it might have to wait until then.
Posted by The Hairy Birder at 14:29