Both today and earlier in the week I have been undertaking a series of wintering bird surveys, and if you include the country I was standing in (England) I could see four countries! Well, three countries and a self-governing British Crown dependency; Isle of Man, Ireland, Scotland and England! On Monday the visibility was great and I had clear skies with a light southeasterly wind.

There were a number of Stonechats about, at least two pairs, and they showed well, usually when my camera wasn't at hand, or when the light wasn't right! But today I managed to get a few snaps of this female below. 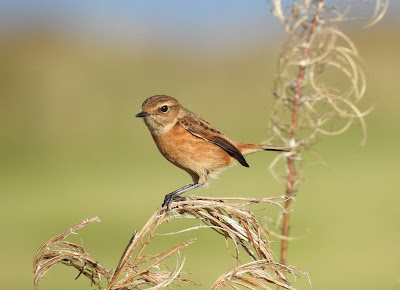 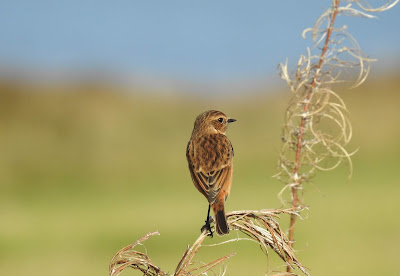 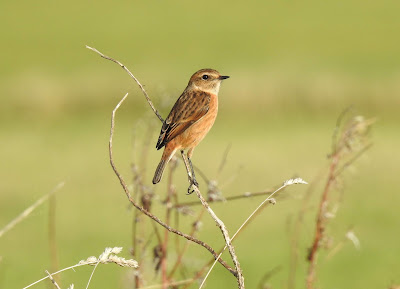 I had quite good numbers of Skylarks and I must admit it was difficult to say whether they were moving, or just feeding in the coastal fields. I would have birds that looked as if they were heading south, and then they would come back north again! Anyway whatever they were doing I had 18 on Monday and 23 today.

Raptors have been thin on the ground other than a Kestrel, Buzzard and Sparrowhawk, but maybe that's all I can expect. What was a pleasant surprise was the covey of five Grey Partridges that flew past us as Gail and I were huffing and puffing walking up a hill! Up to four Song Thrushes have been present, and being a coastal location two Rock Pipits have been moving up and down the coast. 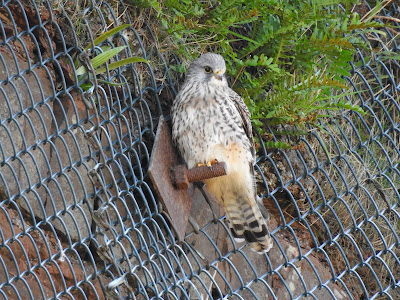 I spent some time seawatching, but it wasn't exactly rocking, and my totals included two Red-throated Divers, seven Pintails, three Guillemots, a Razorbill and 49 Common Scoters.

The best seawatching record I had on Monday was of two Harbour Porpoise that I watched for about fifteen minutes. At about 1:00 pm I picked up a Harbour Porpoise fairly close inshore. It was drifting back and forth, actively feeding, below the cliffs, and breaching with that lovely rolling action that they have. I suspected that there might be a second individual, but for a while I could just see one. After about five minutes two breached together! I tried to get a few shots and you will see my efforts below! They made my day anyway! 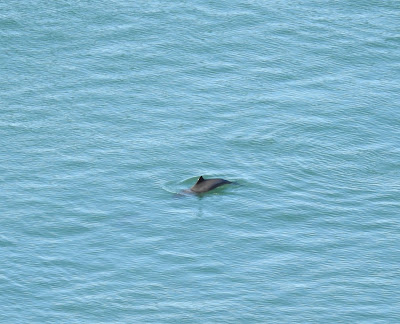 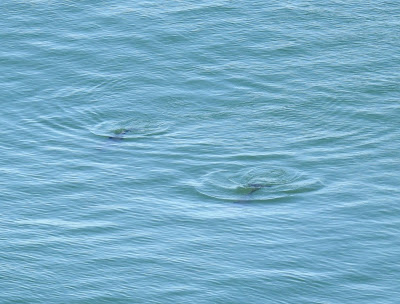 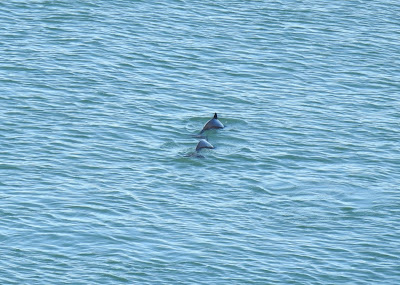 Definitely two!
Posted by The Hairy Birder at 22:10