During the past week I have had two site visits to complete on-going wintering bird surveys, and as winter tightens it's grip and autumn loses it, the surveys get quieter and quieter, until you approach March and spring then tightens it's grip as winter loses its! I've said this before, but Naturalists do tend to spend a lot of time wishing their lives away!

Monday morning saw Gail and I at my Cheshire survey site under two oktas cloud cover with a niggling 10-15 mph south-southeasterly wind. Not impossible conditions for the survey, but the wind was more of a nuisance than a benefit.

During October at this site I recorded quite a few Woodpigeons on visible migration, but this has now stopped and the only members of that family were three Stock Doves that I recorded.

Talking of vis I did have a few Fieldfares go through, 62 in fact, all heading south. Cousins of the Fieldfare included a Song Thrush and ten Redwings, and all made it in to my notebook. Two Buzzards and seven Skylarks were best of the rest, and it was then time to face the onslaught of the M6 on our way home.

On Friday I was in northwest Cumbria, and again Gail accompanied me. No views across to Ireland, the Isle of Man and Scotland today as the visibility was only moderate-good with full cloud cover and a southeasterly wind force three.

Along the coast at this site are some arable fields and numbers of Skylarks are presently foraging in them. Sometimes the Skylarks seem to be heading south and then you will see them coming back! Whatever they were doing we had an impressive 65 this morning.

There was a lack of members of the Thrush family other than two Song Thrushes that look to winter in the area alongside a handful of Reed Buntings and a male Stonechat. A couple of Rock Pipits moved up and down the coast, and the most unusual bird I had looking out to sea was a female Pheasant that flew south just off the cliffs! 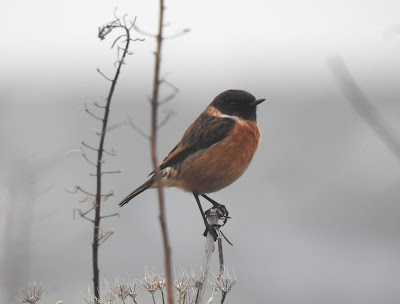 Sea mammals put in an appearance and these made Gail's day. First up were two Harbour Porpoises feeding offshore, but sadly not close enough for any photos, and then we had an Atlantic Grey Seal make it's way along the coast.

It was quiet on the sea with just two Shags, a Guillemot, ten Common Scoters, two Red-throated Divers, and a male Peregrine that flew rapidly south.

It's going easterly over this coming week and I will be trying my best to get out, so if I do I'll be sure to let you know.
Posted by The Hairy Birder at 21:13