There is always something of interest when out in the natural world, that's the nature of it, but sometimes it is less exciting and perhaps a bit more routine. And routine it was yesterday morning,when I was at one of my wintering bird survey sites close to home. This site comprises of intensive grassland, a small area of even-aged woodland and a small stretch of a tidal watercourse. In fact it has routine written all over it!

I knew that rain was going to come in around lunchtime, and I had to get three and half hours of survey time in before the rain arrived. When I started my survey I had full cloud cover with a 10-15 mph SW wind, and by the end it was raining! Thankfully the rain started off quite light, and it only increased in intensity for the last twenty minutes of the survey when I was back under some shelter at my VP.

Bordering the site is a Rookery with about twenty pairs of Rooks in residence. They were coming and going all morning flying from the Rookery to feeding areas and back again, and were quite entertaining. Chaffinches were mainly paired up with several singing males dotted about the site, but there was still a flock of fifteen mobile birds moving around feeding areas.

A pair of Jays were knocking about the woodland, as were four Long-tailed Tits and a couple of Coal Tits. Two Grey Herons, two Moorhens, two Grey Wagtails, two Lapwings, two Mute Swans and two Song Thrushes had a bit of a 'two' theme going on. And a Kestrel was the only raptor of the morning.

I came across some jelly fungi, which shame on me I didn't know what it was even though it is very common! It was Yellow brain Tremella mesenterica, well I think it is unless somebody tells me it isn't it. 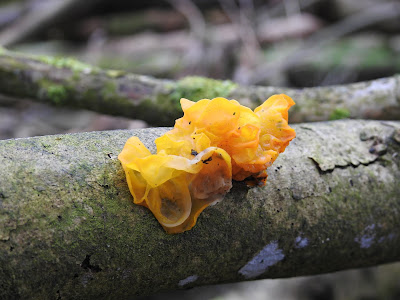 The only other photo that I took was of some lovely Blackthorn blossom, and that alongside the green buds of the Hawthorn and the Hazel catkins, showed that the hedgerows and woodland are finally waking up. 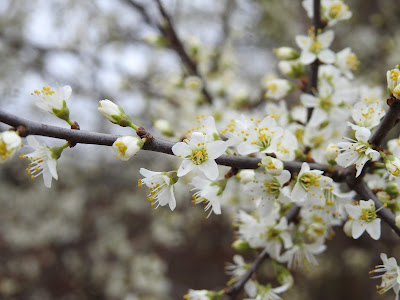 It's been a day of strong winds and showers today, and I haven't ventured forth, and it's forecast for more of the same tomorrow, so it seems unlikely that I'll get out. Monday is looking better, so I might leave it until then.
Posted by The Hairy Birder at 19:00