Yesterday I was in deepest, darkest Cheshire carrying out the penultimate visit to my wintering bird survey site. When I got up at 4:45 am it was windy and wet here in coastal Lancashire, so I decided to check the forecast for my survey site in Cheshire, and the weather people said it would be clear with a moderate breeze! Now, I've done this before when the weather has been rubbish at home, but it has been good for my survey site, and I have set off and low and behold it has been rubbish at my survey site too! However, for some reason I decided to trust the forecast and I headed off to my site and I was greeted with just 1 okta cloud cover, with a 10 - 15 mph SW wind. So the forecast was spot on!

It was indeed a glorious morning, and it was made all the more glorious by the three singing Skylarks I encountered, and the flock of five Buzzards thermalling in the warm morning air. Definite proof of how good the weather was. On the subject of raptors I had a male Peregrine head purposefully south, and it was escorted off the premises by a pair of Lapwings.

The Lapwings were displaying in one of the four fields of maize stubbles that I survey at this site, and one or two other species were making use of the stubble as well. I had a flock of 42 Linnets that were in a particularly weedy stubble, and I think this has been the secret, as they were in a different maize stubble earlier in the winter that too was a tad weedy. I don't normally associate maize stubble as being particularly good for anything, but there was obviously some feed value in these. 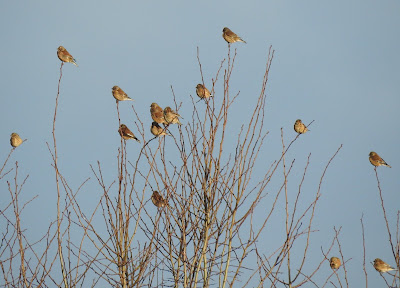 Fourteen of the 42 Linnets

Another stubble held a flock of 47 Meadow Pipits and 23 Pied Wagtails, so I had something to count! I've mentioned the Snipe that roost in this particularly large field with maize stubble before, I know, and this morning I put up 36 birds as I walked across.

Fieldfares and Redwings were also a feature of the morning and I had 92 and 33 of each respectively. A male Reed Bunting, a male Yellowhammer and a Tree Sparrow flew the farmland bird flag, but that was about it. 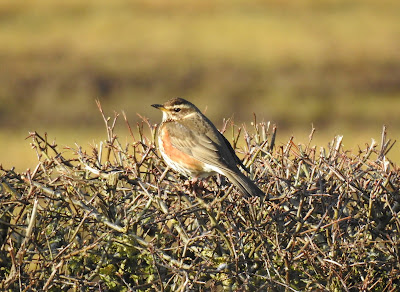 Over on the right you will see that I have updated the ringing totals for Fylde Ringing Group up until the end of February. All the hard work has been carried out by Phil and Andy.

In February seven new species were added to the totals for the year and these were Siskin, Skylark, Coal Tit, Dunnock, Lesser Redpoll, Goldcrest and Wren.

Below you will find the top two species ringed for the month and the top five 'movers and shakers' for teh year.

Top Five Movers and Shakers For the Year

It's looking fairly unsettled for the remainder of the week, and Friday is looking like the only morning I'll be able to get out at the moment. I'll keep you posted as always.
Posted by The Hairy Birder at 16:00