Steady is how Ian and me described this morning's vis migging and sea watching at the Obs. It was a pleasant change not to get up until 6:00 a.m. with the clocks going forward, and at sunrise we were greeted with 6 oktas cloud cover with a chilly 10 mph easterly wind.

We perched ourselves on top of the dunes so we could count the vis and watch the sea as well. The vis started immediately and it was steady. It always amazes me watching Corvids head out over Morecambe Bay, and it makes you wonder where they are going and why does such a generalist feeder move in the first place. Similarly with Woodpigeons, and they were moving out over the bay as well.

Siskins were as elusive as ever in terms of being heard and not seen; was that just one bird calling going over or was it three, is the thought process when one hears a Siskin in the stratosphere. A flock of noisy Twite heading east was a vis highlight, and a calling Tree Sparrow over engendered the same thoughts as the Corvids; where had this been largely sedentary farmland bird come from, and where was it going?! That's the beauty of migration, so many questions and thankfully we don't have all the answers to maintain an air of mystery about it. 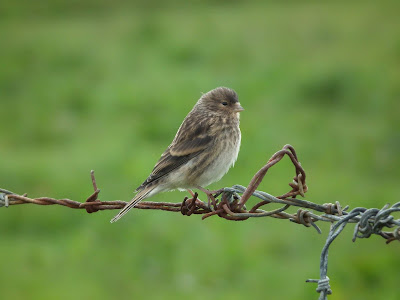 There was some interest on the sea and our totals included two Great Crested Grebes, eight Sandwich Terns, ten Red-breasted Mergansers, twelve Red-throated Divers (including three high flying over-landers), five Shelducks, 19 Eiders, ten Common Scoters, two Gannets and seven Auk sp. There was also a continual passage of Common, Herring and Lesser Black-backed Gulls east into the bay. Unfortunately with everything else that was moving, they sadly remained uncounted.

I didn't look for grounded migrants, so a female Stonechat in the dunes could have been a grounded bird or it could have been a local breeder. So a pleasant couple of hours watching and recording the spectacle of migration was had. 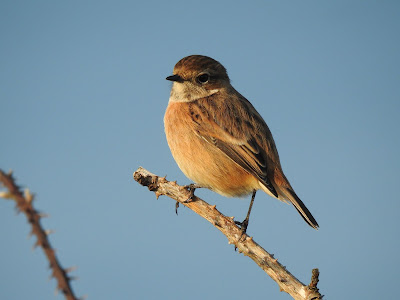 Female Stonechat
Posted by The Hairy Birder at 11:18