All Work And No Play

Gail and I have a week in northeast Scotland coming up, not too far from the Moray coast and the eastern Cairngorms for that matter, so we are looking forward to that. So I thought I would try and slip in a quick blog post before I get too busy with preparations for our holiday, but I'm afraid it's been all work and no play of late.

Other than carrying out the final round of checking our nest box scheme it's been work related bird surveys that's kept me out in the natural world, and given me my birding 'fix'. All the survey work has been in Cumbria, and it has been a bit of a mixed bag.

First up was one of my plantation woodland sites near Wigton, and it wasn't a bad morning weather-wise just over a week ago on the morning of my survey with just 3 oktas cloud cover, and a light southerly wind. For the official survey I use an amended Common Bird Census (CBC) methodology and record the species, number and activity of birds that are utilising the habitat found within the planted areas. In my notebook I just record the stuff that I think is of interest to me from within and outside the survey area.

So with this in mind my observations included three Chiffchaffs, two Blackcaps, eleven Stock Doves (an unusual Stock Dove featured at my next survey site), a Yellowhammer, a Song Thrush, two Great Spotted Woodpeckers, a Tree Sparrow, two Willow Warblers and a Goldcrest.

My second plantation woodland site was near Penrith and it was a tad quieter here with just nine Stock Doves and a Tree Sparrow of note. I've posted a couple of pictures below of one of the Stock Doves, and look closely at it's bill. The upper mandible is very long and down curved, probably as a result of the lower mandible virtually being non-existent. Whether this has been the case since it hatched, or perhaps a growth defect over time, or maybe even some kind of trauma I'm not sure. 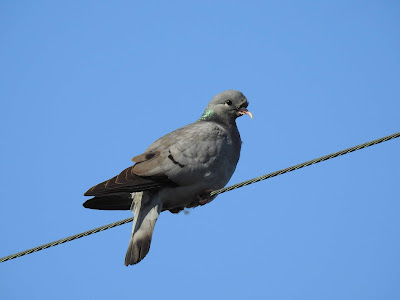 Stock Dove (above & below) 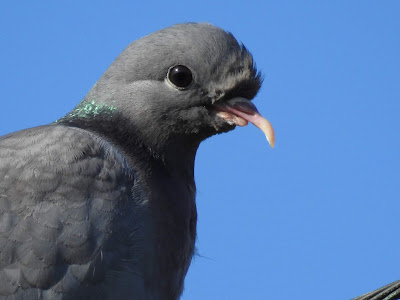 My final survey was in northwest Cumbria overlooking the Solway Firth. I've grown quite attached to this site as I surveyed it twice a month from October - March, and have just completed the second and final breeding bird survey. 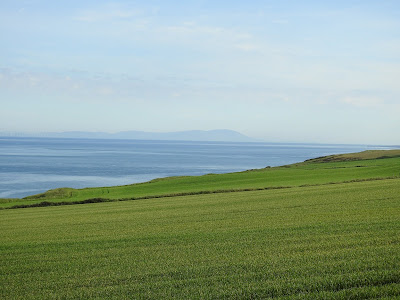 Looking across the Solway Firth to Dumfries & Galloway

It was glorious day when I was here with just two oktas cloud cover and a light southeasterly breeze with views over to the Isle of Man, Ireland and Scotland.

There was quite a few spikes of Northern Marsh Orchid scattered about the site and a couple of Bee Orchids, always lovely to see. 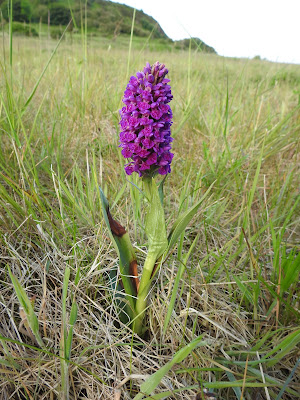 Last weekend Gail, Alice and Me carried out our last visit to our Pied Flycatcher nest box scheme. We just had two broods to ring and a few boxes to check on fledging. Sadly one of the broods of Pied Flys was down to just four chicks as two had died, probably as a result of all the preceding wet weather. In fact in a number of boxes where the chicks had successfully fledged the nest material was absolutely sodden!

We are going to try some mist netting at our nest box site throughout July and August in an area different to where our boxes are, so I am looking forward to that to see what we find. As always I'll keep you posted.
Posted by The Hairy Birder at 20:21