My excursions into the great outdoors this past week have been all work related, so let's hope that over the weekend, the weather allows to me get out just for pleasure, not that I don't enjoy it when I'm out and it's work related!
It was a week of penultimate wintering bird survey visits, and on Tuesday I was at my site close to the coast. It was a grey old morning, with a stiff south-westerly breeze. A Chiffchaff singing as I got out of the car was nice, and so far, Chiffie is the only true summer migrant that I have had. Greenfinches were very active with lots of calling, song-flighting and general spring-like behaviour, and I do believe that they have made a bit of a recovery from their worrying population crash of recent years.
Next to my VP, I could see a female Chaffinch moving around fairly low down in a Willow sp., and as I watched I could see that she was delicately collecting bits of lichen. Chaffinches use lichen in the construction of their nest to make it more camouflaged, and it certainly works.
I could hear a Great Spotted Woodpecker drumming from an area of mature scrub, and then two birds flew past me in the open, chasing each other, and calling like mad; superb!
Mid-week I was at my inland site with some freshwater marsh, and it was a brighter day, with 5 oktas cloud cover and a 10 mph west-southwesterly wind. I was there at first light, and when that sun got up, I could feel the increased warmth from its rays.
Reed Buntings were singing out on the marsh, and I had at least three different birds singing. Moorhens called from within the dense, luxuriant vegetation, and notable in their absence, were the calls of Water Rails. This was my first visit, I think, with no calling Water Rails. However, this is to be expected as they are probably winging their way now to breeding areas anywhere from the UK to northern and central Europe. 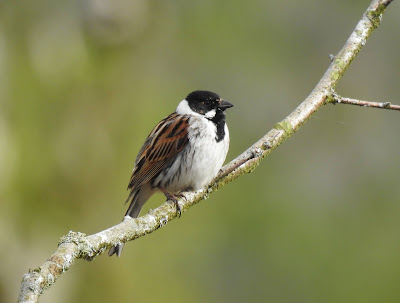 Reed Bunting
I detected a trickle, and it was a trickle, of visible migration this morning, but the first birds certainly weren't trickling, when thirteen calling Whooper Swans powered their way north. The 'trickle' referred to a single Meadow Pipit north, two Chaffinches, an Alba Wag, a Grey Wagtail and six Woodpigeons. 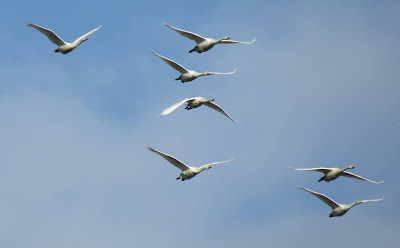 Whooper Swans
The two Coots were still on the marsh, so I imagine they will be nesting shortly, and a Little Egret fed on one of the open pools. A first for me on the marsh was a Cormorant that dropped in to the largest bit of open water, but I wouldn't exactly describe it as Cormorant habitat! The only raptor I had was a calling Buzzard that flew backwards and forwards over the stubbles in the sunshine, flushing the 36 Goldfinches that were foraging there.
It was late morning when I finished my survey, and I headed to my feeding station in the Hodder Valley in Bowland to take down the feeders. The smaller sunflower heart feeders were empty, as expected, and there was just a small amount of feeder seed in my two monster Perdix farmland bird feeders.
After I had packed up the feeding station, I cut a few net rides in the arboretum area of the site, that my predecessor of the conservation charity that I used to work for had designed. Some areas haven't taken as well as others, and these have remained fairly open, and might be suitable habitat for some warbler species. I have had nest boxes up in the valley at this site for Pied Flycatchers since 2002, but I haven't tried the arboretum area for ringing. So, as I can't get into the reedbed and scrub at the pools at the Obs, I intend to have a few ringing sessions here throughout April and May. It will be interesting to see how I get on, and I will of course keep you posted. 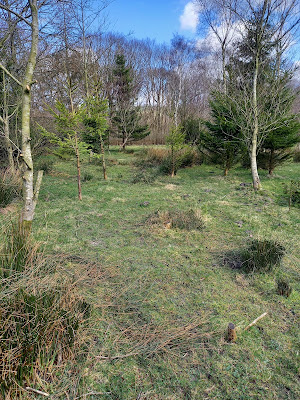 One of the new net rides in the arboretum area
Posted by The Hairy Birder at 12:37