Was It The Fog?

Or was it the time of year, the fact that the feeders needed filling up, or all three, that caused me to have a weary ringing session yesterday morning at my Hodder Valley feeding station. When I arrived at 0700, I had 7 oktas cloud cover with a light westerly breeze, but it looked like it was going to brighten up, as the sun was trying to break through. However, within half an hour the fog rolled in, and it remained like that for the next couple of hours.
I ringed ten birds as follows (recaptures in brackets):
Chaffinch - 4 (1)
Siskin - 1
Coal Tit - 2 (1)
Blue Tit - 1 (1)
Greenfinch - 2
Great Tit - (2) 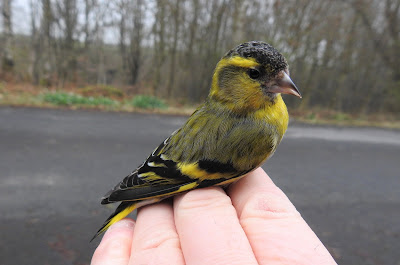 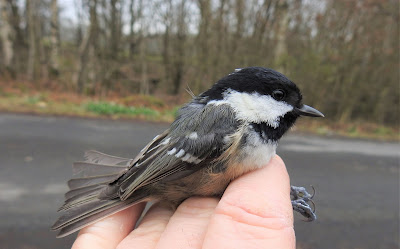 In all honesty, I think it was a combination of factors that caused such a poor ringing session. At this time of year birds are visiting feeding stations less frequently, as they move away to nesting sites.
There's a definite dawn chorus now, and songsters this morning included two Song Thrushes, two Chaffinches, Mistle Thrush, four Robins, Goldcrest, Wren, Great Tit and Woodpigeon. There was a bit of a territorial dispute going on with the Mistle Thrushes, as at one point three birds shot past me calling away. In addition to the Siskin ringed, there were at least five other birds around. 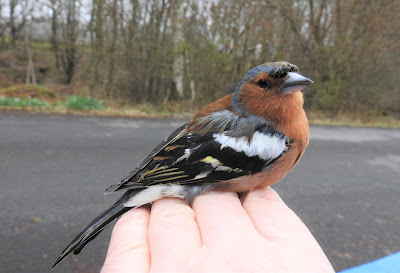 Chaffinch
Two Great Spotted Woodpeckers were present, and a female Bullfinch was a nice addition to my notebook. From outside the woodland, the sound of displaying Curlews and Lapwings was being carried through the dense air, and that further raised the joys of spring!
I ran my garden moth trap last night for the first time this year, but I didn't catch anything. But it looks like we are in for a dry, but perhaps cold, spell over the next few nights, so I'll try again.
I'm checking out a drier area of one of the wetland sites at the Obs tomorrow morning, to see if there is anywhere suitable for pulling in Meadow Pipits for ringing, and I plan to give it one more go at my feeding station Saturday or Sunday morning. I'll let you know how I get on.
Posted by The Hairy Birder at 12:40