On Monday evening Alice, Gail and Me joined our good friends Robert and Diana at their farm near Garstang to ring some Barn Owl chicks, and perhaps some Kestrels. Robert and I climbed into the barn to check the box, and when I slid the inspection hatch open on the box I was greeted by three spangly Barn Owl chicks nearly fully grown, perhaps about eight weeks old. They were nice and calm so I carefully removed them from the box. 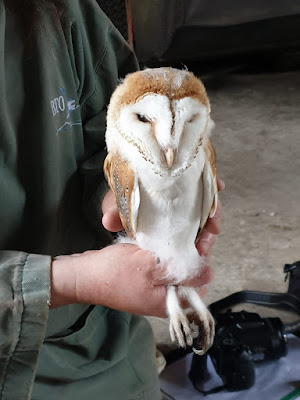 Diana runs various education visits at the farm and the children can learn all about the connections between farming and habitat management, and they also learn lots of interesting bush crafts in the woodland on the farm. On this particular evening Diana had a group of Brownies and they were keen to see the Barn Owl chicks being ringed. The girls were all really well behaved and kept very quiet so as not to spook the Barn Owls, and they were absolutely delighted to be able to get up close to such a beautiful bird.

The three Barn owl chicks were dutifully ringed and returned to their rather odorous nest box!

We checked the Kestrel box in the woods, but they had fledged. On the walk down to the wood we had a Grey Heron on one of the ponds, and four Tree Sparrows were counted along with a singing Blackcap.

A quick rewind to Sunday found Ian and I undertaking a ringing session in one of the areas of reedbed and scrub at the Obs. It wasn't as busy as the previous weekend, but we did ring 32 birds as follows: 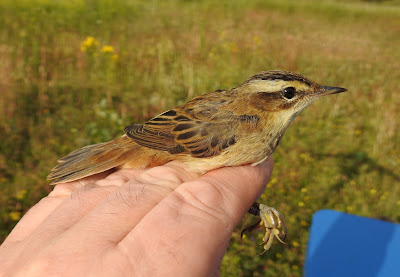 From a birding perspective the most interesting/enjoyable sighting for me, was the flock of six Little Egrets that flew over shortly after first light. They were obviously flying from a roost somewhere to feeding areas on the coast or the estuary. I have mentioned many times before on here about being a birder of a certain age and remembering when Little Egrets were a local rarity! Hence my continued excitement about seeing them!
Posted by The Hairy Birder at 20:45