At the end of last week Gail accompanied me on one of my last round two plantation woodland survey sites. In a few days time I'll start the third visits that look to gather data on whether these new-ish woodlands provide foraging areas for dispersing juvenile birds from adjacent habitats. Anyway, I digress.

This particular site in the upper Eden valley, not a million miles from Kirkby Stephen, comprises of seven small tree planted compartments. It is fairly isolated in terms of how the newly planted areas fit in with habitats in the wider landscape, and as such the bird survey results have been fairly poor. However, with time as the woodland develops this should improve, it's just that initial colonisation is slower than other sites that have habitat linkages to the wider landscape.

'Ticking' Robins were a feature of this morning and there are several other occurrences in this lengthy post (apologies for that) that indicate that it's Autumn! I'm just going to give you the totals for this site as follows; three Willow Warblers, a pair of Oystercatchers with two young (not amongst the trees obviously), eight juvenile Blackbirds, nine Song Thrushes (including six juvs), 50 Lapwings (see Oystercatcher), three 'ticking' Robins, two Lesser Redpolls, a Coal Tit, a Mistle Thrush, two Linnets,  90 Black-headed Gulls (on recently cut adjacent silage field with Lapwings) and two Brown Hares.

Driving away from the site we had two sightings that are sadly becoming increasingly rare. First up was a pair of Curlews with three chicks wandering down the road! The second sighting was a Red Squirrel just as we drove into Kirkby Stephen that ran across the road in front of us. A Red Squirrel will feature again later.

A week ago today Alice, Ian and Me had our first ringing session of the Autumn in some of the reedbeds and scrub at the Obs. From a birding perspective all I can report is two Common Terns that went over calling southeast, four Swifts and a male Blackbird carrying food.

From a ringing perspective we did quite well and ringed 57 birds as follows: 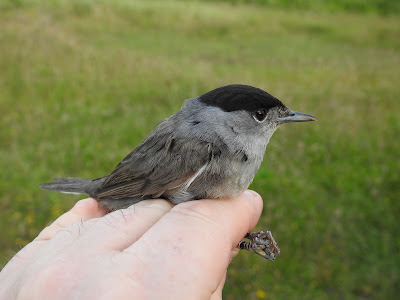 Tuesday found me birding on the Solway near Rigg on the Scottish side. I had full cloud cover, with a 10 mph westerly wind and there were more signs that it was autumn.

Amongst the scrub along the estuary were three Whitethroats, three Linnets, a Song Thrush, four Willow Warblers (3 juvs), singing Blackcap and a singing Sedge Warbler. As the morning warmed a few butterflies were on the wing including thirty Ringlets, eleven Painted Lady's, five Meadow Browns and a Small White.

Out on the mudflats there was a selection of returning waders, again another Autumn indicator, and this selection contained 34 Lapwings, two Black-tailed Godwits, six Curlews, a Redshank and five Oystercatchers.

Earlier this week I finished off the last two of my round two plantation woodland survey sites. The first was near Wigton in north Cumbria, and the highlights included a Stock Dove, two Tree Sparrows, a Chiffchaff, nine Willow Warblers, a Song Thrush, a Goldcrest and four Blackcaps.

Amongst the nettles at this site I came across good numbers of Peacock butterfly caterpillars and I have inserted a photo of them below. 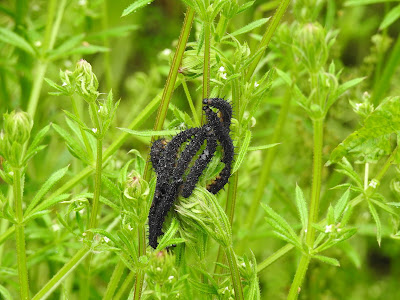 Driving away from the site through some coniferous woodland I had to stop to let a Red Squirrel across the road, my second in a week! So it's definitely Autumn, and I apologise again for the length of this post!
Posted by The Hairy Birder at 15:18