I had two site visits during the past week at opposite ends of Cumbria; one in the south overlooking Morecambe Bay and the other in the north overlooking the Solway. My first survey in the south of Cumbria yielded quite a few species using the plantation woodland as a post-juvenile dispersal foraging area. Nothing amazing at all but three Linnets, three Song Thrushes, a couple of Blackcaps, two Willow Warblers, a Reed Bunting and Tree Sparrow were all making good use of the site.

Swallows have been relatively scarce this summer and lots of Birders, Ringers, Patch Workers, Nest Record Carders have all reported low numbers breeding, so it was a pleasant surprise to find about fifty of these delightful birds perched up on telegraph wires.

The other surprise was to find a juvenile Grey Heron next to what was nothing more than a shallow flood amongst the trees caused by overnight rain. I had a look at/in the flood and it seemed devoid of anything that would be suitable fodder for a Grey Heron, so I guess it was just the area of water that had attracted it, with the assumption that it would be a suitable feeding area.

Close to my survey site is the wonderful Foulshaw Moss, so I called on my way home. I was hoping for a bit more reptilian action, but alas it wasn't to be. My first stop was to have a look at the two feeding stations and they were both alive with birds; Siskins, Lesser Redpolls, Chaffinches, Goldfinches, Reed Buntings, Tree Sparrows, Blue Tits, Coal Tits, Great Tits, Bullfinch and juvenile Great Spotted Woodpecker. 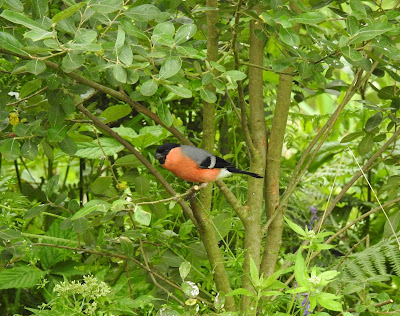 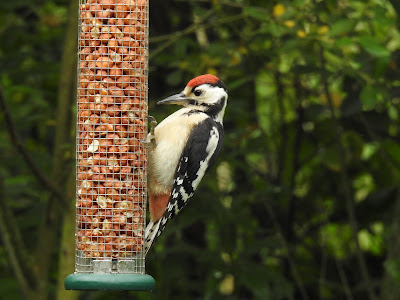 It was an overcast morning so my walk along the boardwalk didn't reveal any inverts other than Small White and Speckled Wood butterflies. Lots of juvenile birds were moving around and I came across a large mixed Tit/Warbler party with thirteen Long-tailed Tits, numerous Blue, Coal and Great Tits, and a couple of Willow Warblers. I had a pleasant hour and a half, but nothing momentous.

Earlier in the week I had a new insect species for my garden, probably brought in by all the warm weather. I'm pretty sure that it was a Field Grasshopper, and you can see a picture below. It was on the side of my wood store so I snapped it with my phone, and then went to get my camera from my car, and it had gone! Typical! 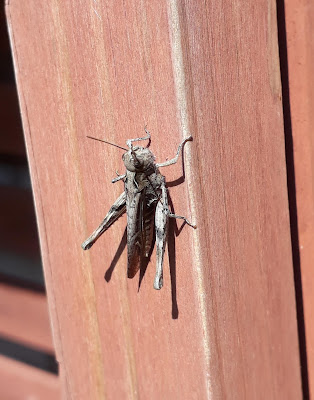 I had another plantation woodland survey site towards the end of the week with stupendous views across the Solway to Scotland, with the Criffell dominating the view. However, the views were a misty stupendous that morning so I didn't bother taking any photos!

There was either a few juvenile Great Spotted Woodpeckers around, or it was the same couple of birds moving about because I had five sightings of juv. Great spots, with only ever two together at one time. It's been a bit of a week for juv. Great Spots!

A couple of Buzzards were over the neighbouring ancient semi-natural woodland, and as I walked along the edge of the planted area I was surveying they were alarming calling at me, so they must have had a nest fairly close by. They can have young in the nest any time from early March to late September, so I didn't linger and moved back in to the trees. 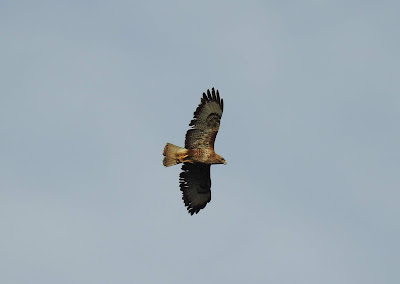 The weather so far over the weekend has been wet, and it is forecast to be wet tomorrow, so Ian and I are planning to have a ringing session in one of the reedy/willow scrub areas of the Obs on Monday. If we do I'll let you know how we get on.

As you know I enjoy lifting old notebooks of the shelf and having a look at what I was seeing the same time of year in years gone by. In 1986 I lived in west Norfolk and I used to bird Snettisham Pits, Titchwell and even Cley after work. I used to love looking at the pools and seeing what 'fresh' waders were about.

Two days stand out, 17th and 18th July. On 17th July I went to Snettisham Pits, which was one of my local patches, and adjacent to two of my ringing sites to see if I could see the adult White-rumped Sandpiper that had been found at the site. It was easiest to see at high tide when waders were forced to roost on the islands on the pits. It was a dull, warm and windy evening and I hadn't been there long when I picked the White-rumped out amongst some returning Dunlin.

The following day I spent the evening at another of my then local patches, Cley, in the days when it was relatively quiet with few birders. This time I was there to look for the adult Buff-breasted sandpiper that had been found, and again I located it fairly quickly and there was only a handful of birders there. Imagine a Buff-breast today during the evening at Cley, there would certainly be more than a handful of birders there!

There was other goodies at Cley that evening too, including three juvenile Bearded Tits, eleven Ruffs, two Green Sands, nine Spotted Redshanks, five Avocets, two Little Ringed Plovers and a Greenshank. A veritable wader fest!
Posted by The Hairy Birder at 20:59