On New Year's Day Gail and I took a wee dander down to the estuary. I love the word 'dander' which is a word from Ireland that means a gentle, meandering walk with no particular haste or purpose. The reason that I love it so much is because a favourite Uncle of mine, who sadly passed away some years ago now, used to use the word whenever he announced he was going out for a walk. He used to take my brother and me for a wee dander back home in Ireland, along the lanes around the village after dark, recount ghost stories and generally frighten us both to death, but we loved it! Oh to go for just one more wee dander with Uncle Tommy...

Gail and I don't celebrate New Year in any real way, it's just an arbitrary date decided upon for a relatively recent calendar. For us the real New Year, is the Solstice, when as you know the return of the Sun is cause for celebration. It certainly makes more sense to us anyway.

Whether you celebrate New Year or not, it was certainly a nice morning for a wee dander down to the estuary under sunny skies with a light southerly wind. 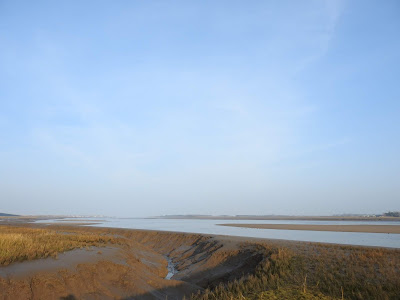 Once we reached the estuary we headed to the point passing by the pool on the way. No Kingfisher on the pool today sadly, but we did have two male Shovelers, eight Tufted Ducks, nine Coots, three Little Grebes and a pair of Mute Swans.

On the other side of the pool was a cracking dog Fox with his red coat looking resplendent in the morning sun. He looked around as though he didn't have a care in the world and slowly tip-toed off along the far bank of the pool. I always think that Foxes are very cat-like in their  movements and tip-toeing to me seems how they walk.

The telescope legs were extended at the point and we had a look on the estuary. The tide was just starting to turn and as it did it lifted, shuffled and gently tugged at the flocks of waders and wildfowl, causing the Lapwings, with a dash of Dunlin to lift, twisting and turning as they did so. I don't think the twisting and turning was all the work of the turning tide, as a couple of Sparrowhawks flew along the edge of the saltmarsh. 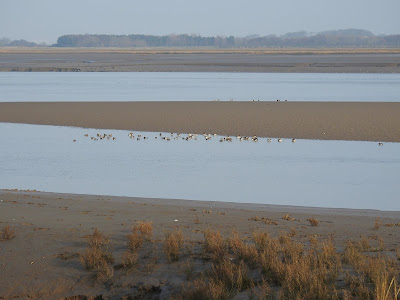 Wigeon - above & (closer) below 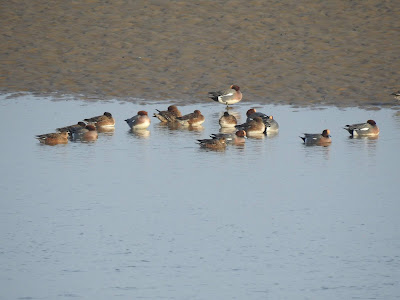 Two Rock Pipits and thirty Pink-footed Geese later, we retraced our steps back past the pool and along the 'Hawthorn tunnel' back to the car.
Posted by The Hairy Birder at 16:06