On Monday Alice and I had a ringing session at the feeding station in the Hodder Valley. I was a bit surprised that my car was frozen up when I headed out just after 7:00 am, as a frost wasn't forecast. At the site it was a glorious crisp morning, with clear skies, no wind and a touch of a ground frost.

From a birding perspective I haven't got much to report from amongst the trees, but there was a good number of Siskins around. They were constantly calling and moving around the tree tops in ones and twos, and then we had a group of about thirty or so. In total there was a good 50 plus, but they don't seem interested in our feeders as yet and seem to be sticking to natural food in the form of Birch and Alder catkins.

There was perhaps about a dozen Redwings moving about the woodland, and I registered the calls of at least two Fieldfares too. Other calling birds included Nuthatch, Great Spotted Woodpecker, Lesser Redpoll and Jay.

We ringed 39 birds as follows (recaptures in brackets):

It was a good total of Goldfinches, and they have obviously found the nyjer seed, and hopefully in a week or two the Siskins will have too! 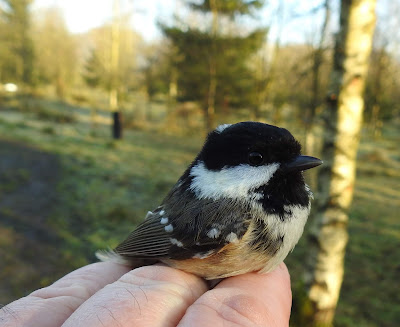 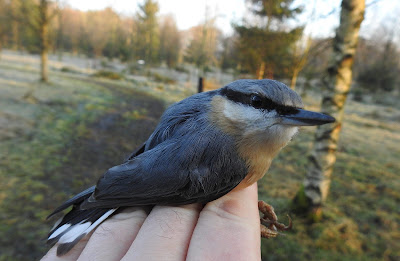 Nuthatch
Posted by The Hairy Birder at 17:01