At the end of last week I was back in the northeast close to Berwick continuing with my series of wintering bird surveys. It was a cold, cloudy morning with a light southwesterly wind. It was also quite a quiet morning, but as always it was a pleasure to be out.

I recorded two species of geese during the survey, 86 Pink-footed Geese that flew over, and a Brent Goose that was feeding along a roadside verge. You don't expect, while I don't anyway, to see a Brent Goose feeding on a roadside verge alongside the river with some Oystercatchers and a Curlew! Having said that, there is plenty of grass in this location, so maybe the Brent Goose is on to a winner. 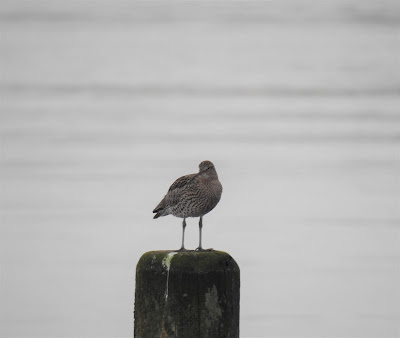 There was a lot of water in the river and large quantities of debris were being carried towards the estuary including large tree trunks and even sections of vegetated eroded bank material! We have had a lot of rainfall recently and this combined with a falling tide meant the river was running was seriously fast.

It was amusing to watch the antics of turbo-charged ducks and divers, and species such as Goldeneye, Goosander and Red-throated Diver were being carried downstream at a high rate of knots! They would dive, appear further upstream, and then streak past me again! I couldn't quite believe how fast a male Goldeneye, in particular, travelled down river. 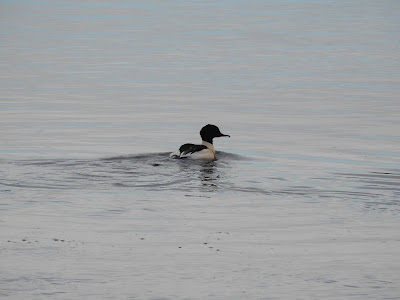 In addition to the above it was quiet, as I said before, and my notebook records just two Rock Pipits, five Eiders, six Turnstones, two Shags and 93 Redshanks.

After a few hours of survey it was time to head back west through the beautiful Borders country of Scotland, and home to Lancashire.
Posted by The Hairy Birder at 16:06