You Never Know What's Lurking In A Ditch

Yesterday morning I was back at one of my wintering bird survey sites in the west of Lancashire and it was a tad chilly under the leaden skies with a cool east-southeasterly wind. However, the skies later cleared and the sun came out. And it must have got warmer because I took my woolly hat off and replaced it with my baseball cap!

As of recent visits to this site Fieldfares have been the main species that I have recorded and this morning I had a cracking total of 282 of these Norse invaders. Interestingly, I only had seven Redwings and two continental Blackbirds.

Raptors were thin on the ground and were just represented by three Buzzards and two Kestrels. A flock, in fact a very small flock, of three Whooper Swans southwest was nice, with a few Pink-footed Geese over too, somewhere in the region of 524 birds mainly heading in a north-ish direction. 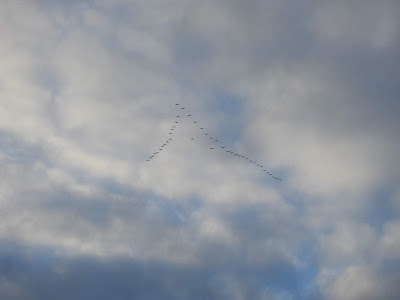 I watched a Little Egret in the next field to where my vantage point (VP) was located. It walked along the boundary in front of a 'gappy' Hawthorn hedge and then disappeared in to a ditch. Now, I know this particular ditch quite well as I used to have to walk along it in previous surveys, and to say that it is uninteresting is an understatement, but not to a Little Egret obviously!

I never saw it emerge from the ditch the whole time that I was there, so it either popped out without me seeing it, or it was finding lots of food and was having its fill! It made me think that you never know what's lurking in a ditch, because I wondered how many other nondescript ditches have an unseen Little Egret wandering along them?!

I mentioned before how it warmed up during the morning and I noticed lots of dancing non-biting Midges around some of the Hawthorns. I decided to see whether I could photograph them or not, and I think the answer is probably not as you will see from the pictures below. Looking back on my attempts on the screen on the back of my camera they looked like flocks of birds, well perhaps squinting with your eyes half closed they did! 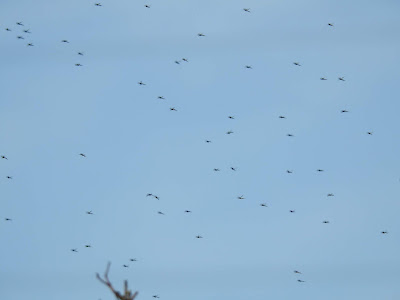 Non-biting Midges above & below 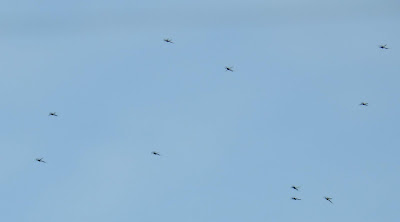 Two warbler species in the hedge behind my VP was noteworthy, with a calling Goldcrest and Chiffchaff. The Chiffie was more interesting and was my first over-winterer this year. A distant flock of 52 Pintails heading south, and a fly-over Great Spotted Woodpecker later my survey finished.

The forecast is looking wet for tomorrow, and ringing is definitely out of the question, but I will keep checking just in case.
Posted by The Hairy Birder at 16:39