Mud...And Not The Glorious Kind

It was a case of mid-week mud for me last week, and not mud of the glorious kind either! I was back at my wintering bird survey site in the west of the county, and I had to move my VP location by about ten metres because of the wet and muddy conditions under-foot. Lots of rain resulting in a high water table and many sets of sheep feet had poached the area where I usually stand. So, under 7 oktas cloud cover, with a stiff-ish SW wind I undertook another survey. 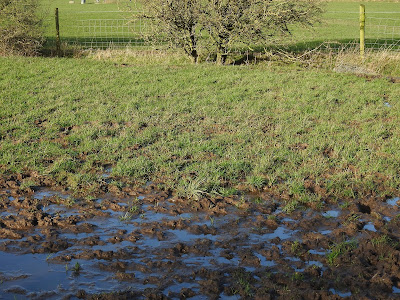 Thrushes were still very much the order of the day, and they had switched from feeding on berries (they have cleaned the Hawthorns out) to feeding on the wet grassland. The higher water table was presumably bringing invertebrates to the surface, and there was rich pickings for them and the Starlings. More Redwings this week, 21, and a few more Fieldfares totalling 327!

As the morning progressed it went from 7 oktas cloud cover, as stated above, to clear, sunny skies. The blue skies and sunshine encouraged a good deal of activity from the local Buzzards, and I was treated to a display from at least six individual birds. Other raptors were a male and female each of Kestrel and Sparrowhawk. 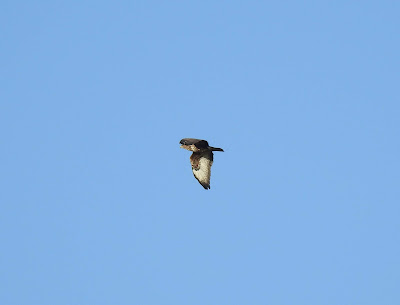 The Sparrowhawk was a young male, and it whizzed past me close to my VP. I was first alerted to his presence by the flock of Meadow Pipits (52 of them) that lifted from the field in front of me. I then lost him from view behind the network of hedges, which he will have been using as cover to lay an ambush as he traversed the landscape. However, I could monitor his progress by the flocks of birds he was putting up; first a large flock of Starlings took to the air, relying on their numbers to try and confuse him, and then a smaller flock of Fieldfares 'chack-chacked' as they moved out of his way. You've got to love a Sparrowhawk, as they will provide the patient observer with no end of pleasure and entertainment!

After 268 Pink-footed Geese, a Grey Wagtail, a  Mistle Thrush, three Skylarks and a Song Thrush my survey ended, and it was time to head home. 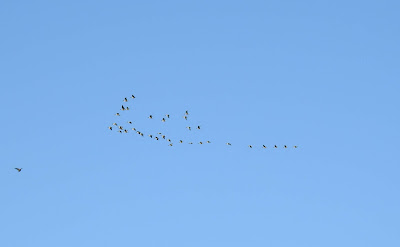 Pink-footed Geese
Posted by The Hairy Birder at 20:51