A Field Sheet At Last

I managed to ring my first birds for the year yesterday, and what a joy it was to complete a field sheet at last! More of that later, but now I need to rewind four days to when I was working on the Cumbrian side of the North Pennines.

It was a beautiful morning between Orton and Appleby when I set off, with virtually clear skies and a light north-westerly wind. It was cold at first, but after I had slogged up-hill for about twenty minutes I had warmed up nicely. I was surveying two blocks of upland rough grassland to see what was breeding on both areas. 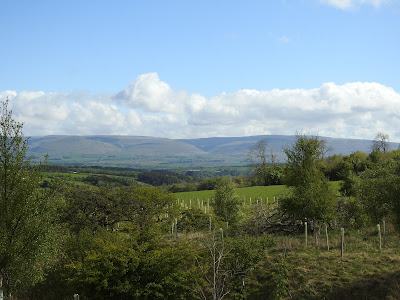 As I set off there were plenty of summer songsters in the hedgerows and woodland, including four Willow Warblers, two Redstarts, a Garden Warbler, four Blackcaps and a Chiffchaff. Raptors were thin on the ground, and all I had were a couple of Buzzards.

The areas of rough grassland held good numbers of breeding Meadow Pipits and Skylarks, 17 and 12 of each respectively, and I also counted five Lapwings and a single Curlew. What was interesting was how dry these areas were, and I wondered how any wader chicks would get on trying to find invertebrates.

The following day I was back in the lowlands close to home carrying out the second repitition of a Breeding Bird Survey (BBS) on some intensively managed farmland. As you might expect, birds were thin on the ground other than two Blackcaps, a Song Thrush, two Stock Doves, a couple of Swifts, two Whitethroats, a Linnet and a singing Goldcrest. I did have four Rooks high heading north, and I wondered where they were going at this time of year? 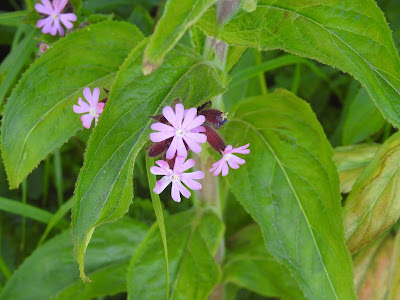 Along the roadside verges there was plenty of Red Campion

On my way home I called in at the pools at the Obs to see what the net rides were like in the reedbed, as with the government's easing of lockdown the BTO was allowing some ringing to take place in England again. The net rides had some water in, but were just about workable, and as the days go on it should be an improving a picture, so I might try and have a ringing session later in the week and hopefully catch up with some late migrant warblers.

It was heartening to see thirty Swifts, with a similar number of House Martins, hawking for insects over the pools. I had my first Little Grebe chick, and there was a number of singing Whitethroats, and Sedge, Cetti's and Reed Warblers distributed across the site.

My moth trap has been quiet, mainly because I missed a few nights when I have had a survey the following day, but a couple of morning's ago I had a single Flame Shoulder which was a new species for the garden, for the year.

It was yesterday that I managed to complete a field sheet at last, as Gail and I carried out a check of our next box scheme on the River Hodder in Bowland. Out of 41 boxes ten are occupied by Pied Flycatchers, which is good because our long-term average is seven. We managed to lift eight females off the nest, of which seven were already ringed; two of our birds and five ringed elsewhere. 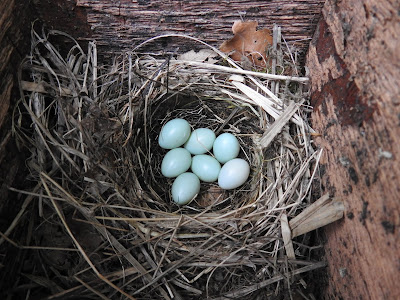 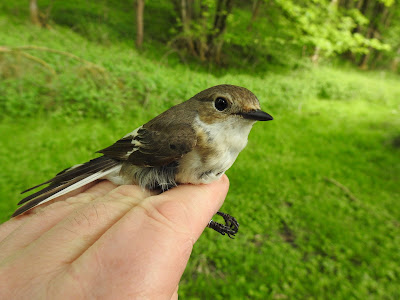 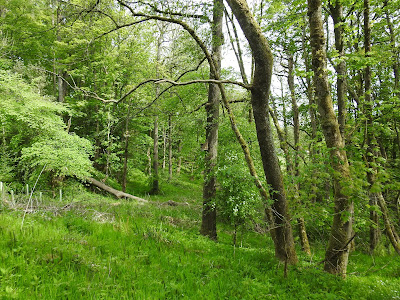 A view of the woodland where our boxes are located 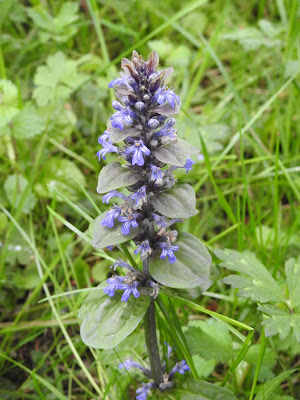 Some common wildflowers encountered include Bugle
(above) and Herb Robert (below) 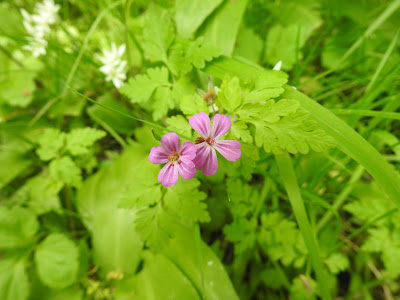 We ringed two broods of Blue Tits (7 & 7) and a brood of seven Great Tits. In addition to those ringed we have a further six boxes occupied by Great Tits, two by Blue Tits and one by Nuthatches of which you can see a short video clip below. 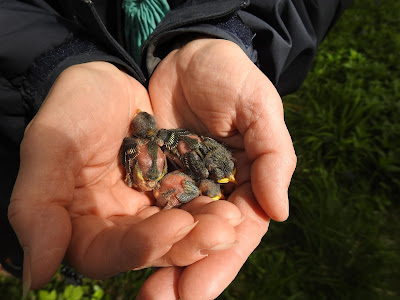 After we had completed the monitoring of the boxes, we were socially distantly chatting with the site owner, Simon, when Gail picked up a Red Kite. Well done Gail! We watched the Kite for three or four minutes before it disappeared behind some woodland. Interestingly Simon had seen a Red Kite here a few weeks ago as well.

I'll look forward to inputting our ringing efforts on to DemOn (Demography Online; the BTO's ringing and nest record online recording system) and seeing where the ringed Pied Flycatchers are from. I'll be sure to let you know! 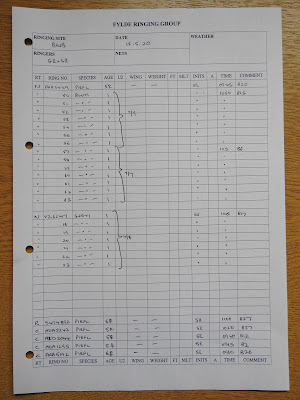 Field Sheet
Posted by The Hairy Birder at 20:02

Good to see you can finally get out and do some ringing. Still in lockdown in Scotland but been doing some ringing in garden when the weather and work allow.

And you've got a cracking garden to do some ringing in!