More Than A Feeling

I was out early this morning on my daily exercise for two reasons; one I am always out early when birding (first light for me), and two, I wanted to avoid as many people as possible, for obvious reasons, not just because I am a miserable old birder! Well, I am a bit! The plan was to call at the coastal farm fields close to home, and then drop in at the cemetery and the pools on my way home before most people were up. And the plan worked beautifully, as I was back home just as Gail was getting up, so I could enjoy a second breakfast!

My Blog title doesn't refer to the epic track of the same name from Boston's debut album, but to the 'feeling' that we as birders have for a particular morning. It can feel quiet, feel like there will be some grounded stuff around, or even feel 'rare', when perfect weather conditions have played out and you expect the unexpected. A lot of the time, in fact possibly most of the time, the feeling doesn't come to fruition. This morning was one of those mornings when it was more than a feeling, the blocking north-westerly conditions of yesterday had changed to the birder's friend, a light south-easterly breeze. Surely there would be some birds about in the form of some good seabird passage maybe, the odd decent grounded migrant or two, or perhaps some classic May vis. Well, it sort of delivered and didn't, in a quiet kind of way!

It was 5:00 am when I got out of my car, and headed along the sea wall. Not a soul around, just as I like it. Following on from yesterday's blog post, showcasing some sunrises and sunsets that I have snapped, I snapped another this morning with my phone, and I have posted it below. 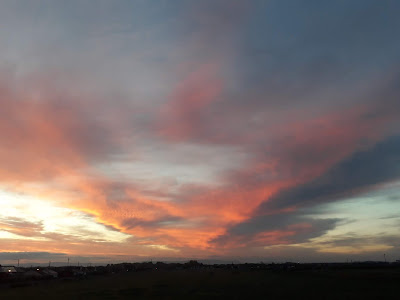 I walked the full length of the grass embankment behind the sea wall to the public footpath, and paused a while to have a look on the sea, and also from this position I can count any vis that whizzes through behind me over the farm fields.

It was quiet on the sea but there were a couple of highlights. Firstly, there was a Black-throated Diver that headed south, and secondly a Little Egret a long way out to sea, that too headed south. They normally stick close inshore, but this bird had different ideas.

There wasn't much vis other than a Tree Pipit, 14 Swallows, an Alba Wag and a Sand Martin.

I called in at the cemetery briefly as planned, and noticed a passerine towards the top of a tree that looked interesting. I had just got on it and saw that it was a Spotted Flycatcher, when it took off, circled a couple of times and headed northeast climbing all the time. A Spot Fly on vis...sort of!

Another singing Garden Warbler in the northwest corner, with a second singing bird in the southwest corner, made me realise that there had been an arrival of Garden Warblers. After a singing Willow Warbler and another Tree Pipit over, it was time to leave.

I paid a flying visit at the pools, and just literally scanned the two pools before heading home for breakfast number two. Another singing Garden Warbler was nice, and just looking over the pools I had three singing Sedge Warblers...definitely an arrival. The usual suspects were on the pools like three pairs of Tufted Ducks, twelve Coots (one with a chick), a number of loafing Herring, Lesser Black-backed & Great Black-backed Gulls (they come in to bathe on the new scrape) and a pair of Great Crested Grebes. 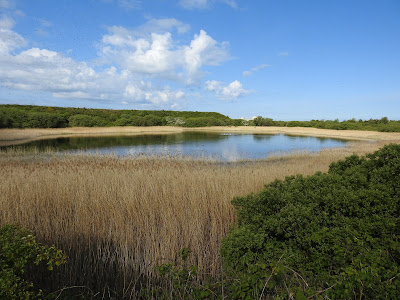 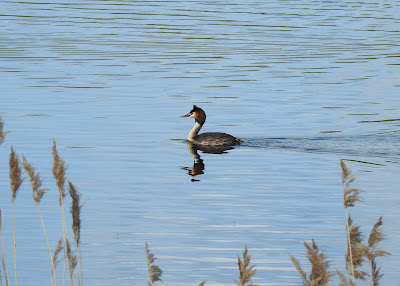 So, it was a funny old morning that was quiet and not quiet at the same time. Back home and back in lockdown, there was nothing in my garden moth trap, but I added another species for the garden lockdown bird list in the form of two Swifts heading north. That and the Sand Martins that I had yesterday, brings my total to 45 species for the lockdown period.

I'll run the moth trap again tonight, and fingers crossed catch this time!
Posted by The Hairy Birder at 19:58

I thought you had gone on holiday to Boston there when I saw the title :)