As I sit in my office writing this Blog, I'm waiting for a new pair of bins to arrive, as I've ordered a pair of Zeiss Victory SF 10x42s. And I can't wait for them to arrive later today. The reason I'm telling you this is by way of an explanation as to why I haven't posted anything for a few days. I won't go in to all the 'why's and wherefore's', but it's sufficed to say that I have spent two days needlessly waiting in, when I could have been out communing with the natural world!

The lockdown garden birding competition over at North Downs & Beyond finished on 6th May, and I ended up recording 48 species over the 49 days of lockdown, giving me a percentage score of 71% based on the percentage of birds I recorded during lockdown, against my all-time garden list. I'm quite pleased with that!

I have been running my moth trap, but it has been very quiet (what's new there I hear you say) and all I have recorded over the past few days is Hebrew Character, Light Brown Apple Moth and Bright-line Brown-eye.

However, on 9th May I caught a species of Ichneumonid Wasp, that I think is Yellow Ophion, and you can see a picture of it below. I apologise for the 'egg carton' shot, but it flew off before I could attempt to manoeuvre it on to some vegetation. I say that I think it is a Yellow Ophion, but if any of my expert invert friends know differently, please let me know. 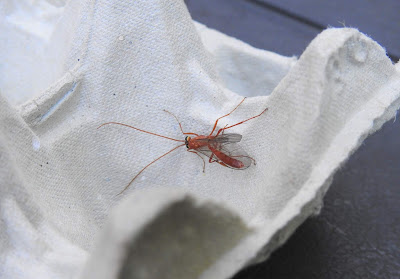 I must admit I don't know a great deal about Ichneumonid wasp species, and I have to admit that I had to look them up and found a really useful Beginner's guide to identifying British ichneumonids by Nicola Prehn and Chris Raper, well worth looking up if you're interested.

Using this very useful guide I managed to narrow the ichneumonid that I caught to one of the nocturnal, orange-bodied species, and namely Yellow Ophion Ophion leutus. The hosts for this wasp are Hart and Dart moth caterpillars. They are mainly active at night, and as such are often attracted to light, hence it being in my garden light trap. What a cracking wee beastie!

Back in 1992 on 9th May, I had a very unusual ringing experience. During the 1990s we used to ring at British Nuclear Fuels Ltd.'s (BNFL) Springfield site at Salwick near Preston in Lancashire. Within the site was a Rookery, and every year we used to count the number of nests. However, on this particular day the site employee, Jim, who we worked with, said do you want to go up into the Rookery and ring some of the Rook chicks?

I was with Dave on this particular occasion and we weren't sure what he meant. We then heard a 'beeping', and a trundling of wheels from some form of heavy plant, and Jim came round the corner driving a telescopic boom lift, or something similar. It was a monster bit of kit, think of a Cherry Picker on steroids, and from memory I think it could reach somewhere in the region of 150 feet.

Anyway, David and I climbed on board with Jim and he extended the telescopic boom, with us on the platform (or whatever it is called) up in to the trees that contained the Rookery. He managed to manoeuvre us close to a Rook's nest on the outer edge of the colony, and we easily leaned over and lifted the Rook chicks out of the nest! Three chicks were duly ringed and returned to the nest!

As I said before, it was a very unusual ringing experience, and one I'm not sure I would want to repeat, even though I do have a head for heights!

As I finished writing this my new bins arrived, and I can't wait to use them in anger! 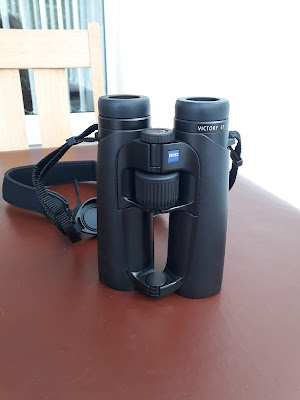