...and never a more truer expression has there been!

It was cold this morning as I left the house at 5:30 a.m. to complete one of my bird surveys of a client's hedgerows in the Wennington valley. The thermometer on my car read 2 Celsius, and in shady places there was most definitely a ground frost.

I have always grown up with this expression, spoken by my Lancashire/Yorkshire father, but never by my Irish mother. I must admit that I always thought that the May referred to the month of May, but a bit of research via Google states that some people think that 'May' refers to the May-flower or Hawthorn blossom, that flowers in late April or early May. So, in other words don't take your warm clothes off until the May blossom is out, because cold weather can return during the Spring months!

And I most certainly didn't take my warm clothes off until I had been surveying for a couple of hours. I had an enjoyable couple of hours surveying six hedgerows. I didn't have anything very exciting, but there was a smattering of summer migrants around including four singing Blackcaps, four singing Willow Warblers, two singing Garden Warblers that were duelling in a lovely thick hedge that snakes down a hill-side, a singing Redstart and a singing Chiffchaff.

There is a healthy population of Brown Hares on this farm, and I recorded ten on my walk round including a leveret. In one of the fields the Farm Manager has done a re-seed, and the fine tilth has attracted at least three pairs of nesting Lapwings. 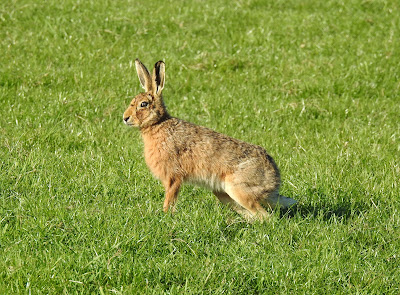 I had two singing Song Thrushes during my survey, and these two songsters were joined by their larger cousin the Mistle Thrush. A calling Tawny Owl was a bit of a surprise as it was a couple of hours after sunrise that I heard it.

The only raptor that I saw was a single Kestrel perched on one of their favourite perches...overhead wires. Down by the river two female Goosanders flew out and round before dropping back on the river.

Nothing rare, but a pleasure to be out as always, especially under the current circumstances! 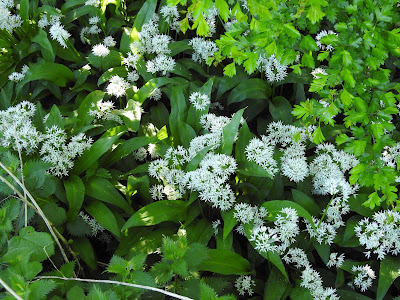 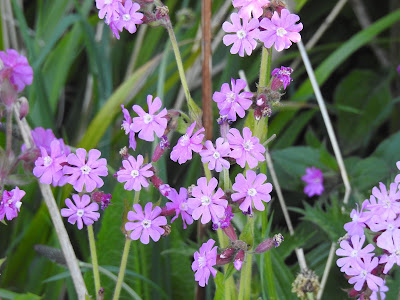 I've added another species to my garden lockdown list, in the form of a couple of House Martins, and I have just come in from watching five Swifts over the garden. There was lots of displaying going on, and they looked magnificent in the evening sunshine, as the reddish-rays caught and lit up their underparts, making them look almost golden. Without doubt one of my favourite birds.

Every year when the Swifts return, I am reminded of Ted Hughes' fantastic poem about them. I know I have posted it before, but I have copied it below again. Wonderful words!

Fifteenth of May. Cherry blossom. The swifts
Materialize at the tip of a long scream
Of needle. ‘Look! They’re back! Look!’ And they’re gone
On a steep

Controlled scream of skid
Round the house-end and away under the cherries. Gone.
Suddenly flickering in sky summit, three or four together,
Gnat-whisp frail, and hover-searching, and listening

For air-chills – are they too early? With a bowing
Power-thrust to left, then to right, then a flicker they
Tilt into a slide, a tremble for balance,
Then a lashing down disappearance

Behind elms.
They’ve made it again,
Which means the globe’s still working, the Creation’s
Still waking refreshed, our summer’s
Still all to come —
And here they are, here they are again
Erupting across yard stones
Shrapnel-scatter terror. Frog-gapers,
Speedway goggles, international mobsters —

A bolas of three or four wire screams
Jockeying across each other
On their switchback wheel of death.
They swat past, hard-fletched

Veer on the hard air, toss up over the roof,
And are gone again. Their mole-dark labouring,
Their lunatic limber scramming frenzy
And their whirling blades

Sparkle out into blue —
Not ours any more.
Rats ransacked their nests so now they shun us.
Round luckier houses now
They crowd their evening dirt-track meetings,

Racing their discords, screaming as if speed-burned,
Head-height, clipping the doorway
With their leaden velocity and their butterfly lightness,
Their too much power, their arrow-thwack into the eaves.

Every year a first-fling, nearly flying
Misfit flopped in our yard,
Groggily somersaulting to get airborne.
He bat-crawled on his tiny useless feet, tangling his flails

Like a broken toy, and shrieking thinly
Till I tossed him up — then suddenly he flowed away under
His bowed shoulders of enormous swimming power,
Slid away along levels wobbling

On the fine wire they have reduced life to,
And crashed among the raspberries.
Then followed fiery hospital hours
In a kitchen. The moustached goblin savage

Nested in a scarf. The bright blank
Blind, like an angel, to my meat-crumbs and flies.
Then eyelids resting. Wasted clingers curled.
The inevitable balsa death.
Finally burial
For the husk
Of my little Apollo —

The charred scream
Folded in its huge power.